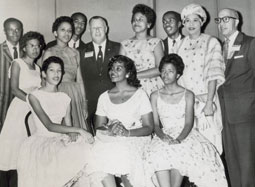 In her memoir, Warriors Don’t Cry, Melba Pattillo Beals walks students into the events of Central High School and makes them feel the sting of physical and emotional abuse the Little Rock Nine suffered as they lived the history of the Brown v. Board of Education decision. Beals’ book tells the story of young people who became accidental heroes when their lives intersected a movement for justice in education, and they made the choice to join the movement instead of taking an easier path.

This teaching activity encourages teachers to begin with a role play to increase students’ knowledge of the historical context of segregation and the struggle for civil rights. Following the role play, students write a “Writing for Justice” narrative about an incident from their lives. They then engage in a literary tea party as they meet key players in the book. Read more and download teaching activity.

The Zinn Education Project is a collaborative effort by Teaching for Change and Rethinking Schools. 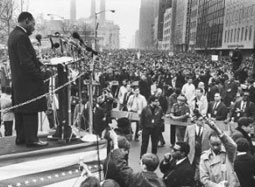 A Revolution of Values

On April 4, 1967, exactly one year before his assassination, Martin Luther King Jr. delivered a speech in New York City on the occasion of his becoming Co-Chairman of Clergy and Laymen Concerned About Vietnam (subsequently renamed Clergy and Laity Concerned.) Titled “Beyond Vietnam,” it was his first major speech on the war in Vietnam—what the Vietnamese aptly call the American War. In these excerpts, King links the escalating U.S. commitment to that war with its abandonment of the commitment to social justice at home. His call for a “shift from a ‘thing-oriented’ society to a ‘person-oriented’ society” and for us to “struggle for a new world” has acquired even greater urgency than when he issued it decades ago. Read more and download teaching activity.

The Zinn Education Project is a collaborative effort by Teaching for Change and Rethinking Schools.

Ask me about: Freedom Schools

The Freedom Schools of the 1960s were first developed by the Student Nonviolent Coordinating Committee (SNCC) during the 1964 Freedom Summer in Mississippi. They were intended to counter the “sharecropper education” received by so many African Americans and poor whites. Through reading, writing, arithmetic, history, and civics, participants received a progressive curriculum during a six-week summer program that was designed to prepare disenfranchised African Americans to become active political actors on their own behalf (as voters, elected officials, organizers, etc.). Nearly 40 freedom schools were established serving close to 2500 students, including parents and grandparents.