Ronald Reagan is frequently glorified in the mainstream media. Here are the five enduring myths of the Reagan presidency. 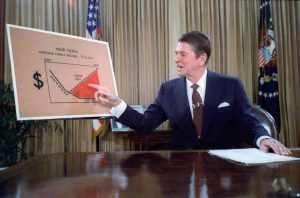 Starting with the myth that the USSR was the “Evil Empire,” Reagan unrelentingly drove up military spending to fight an enemy that was, according to intelligence reports, already in decline (partially from spending too much on an un-winnable war in Afghanistan). Reagan, however, insisted on more military weaponry, including  “Star Wars,” a strategic missile defense system straight out of science fiction. Military spending has not decreased since Reagan’s presidency as his successors have feared the political consequences of looking weak on defense. Now, the U.S. military budget is greater than all other countries of the world combined. 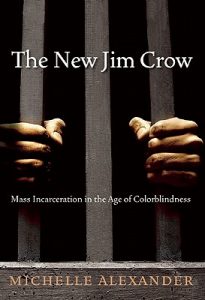 Reagan’s own intelligence agencies participated in the urban crack cocaine explosion and used the profits from crack sales to buy weapons for wars that Congress refused to fund (mainly the Contras in Nicaragua). For more information, see Gary Webb’s excellent book Dark Alliance: The CIA, the Contras and the Crack Cocaine Explosion. Nancy Reagan’s infamous “Just Say No” to drugs campaign was seemingly an innocent idea. Unfortunately, it was backed by a president who instituted a zero-tolerance policy toward drug use, resulting in an explosion in our prison populations. Drug offenders, who were arrested for mostly non-violent crimes, filled our prisons and led to a booming corporate prison sector. In the U.S. we now have the largest prison system in the history of the world by sheer numbers and per capita. Michelle Alexander’s invaluable book, The New Jim Crow: Mass Incarceration in the Age of Color Blindness, offers a richer, detailed explanation of our troubled prison system and how the Reagan administration spurred it.

Myth #3: Reagan was a great communicator.

In the 1980s, while Reagan was supposedly inspiring a nation with his optimism, a new disease was wreaking havoc on the country’s gay communities. In 1981 scientists recognized AIDS as a new disease, which, at the time, was limited mainly to gay men and intravenous drug users. With scientists and researchers begging for public money for research, Reagan kept silent – for YEARS! In private he was telling his own surgeon general that the carriers of the disease were getting what they deserved. Near the end of his presidency, and after six years of silence, Reagan managed to make a speech about AIDS. By that time, over 20,000 Americans had died of the disease and it had spread to over 100 countries. Since then, millions of people worldwide have died. What would have happened if Reagan had directed all of the resources at his disposal towards AIDS research in1981? Revisionist historians are trying to convince us that Reagan was “The Great Communicator.” Unfortunately, the so-called communicator refused to even say the word “AIDS.” Celia Farber’s Serious Adverse Events: An Uncensored History of AIDS offers an excellent history of the AIDS epidemic.

A closer look at just a couple of foreign policy decisions shows Reagan to be on the wrong side of history when democratic people’s movements rise against totalitarianism or corporate interests. During the civil war in El Salvador, Reagan wholeheartedly supported the repressive military government, a regime that was infamous for its death squads, for torturing citizens and for violations of human rights too numerous to list.

Myth #5: Reagan was a champion of every day Americans.

When Reagan fired nearly 12,000 striking air traffic controllers in 1981, he framed the debate on union/business relations and employee rights for the next 30 years. Since then, it has been a common narrative in the mainstream media to blame unions for massive job losses and for creating an environment hostile to global competition.  Rather than blaming trade policies that make it easy for transnational corporations to import goods made from exploited labor and plundered resources, the American public has been led to blame unions for the high cost of labor that drives corporations to close in the U.S. and open for business in places without organized labor. In fact, this “blame unions” attitude persists in present-day school reform in Washington D.C. Michelle Rhee demonized teachers’ unions for blocking school reform. Presented with an anti-union narrative resembling the one they have been fed for years, all mainstream media outlets ate it up.

Let us not forget that Reagan pushed through drastic cuts for mental health services, forcing many patients out into the streets of our cities. This created the stereotype of the homeless as mentally ill and led our society to criminalize citizens living in abject poverty and in need of help from a social safety net.

In order to reduce funding to the poor, Reagan demonized lower-income families for being impoverished by their mythical “Welfare Queen” mothers. The term’s obvious racism also stoked class conflict. Meanwhile, in order to cut money for “free or reduced” lunch programs for low income families, he proposed that catsup be categorized as a “vegetable.”

—by Don Allen, publications director of Teaching for Change, is the son of a fired air traffic controller.

Noam Chomsky on the Distorted Legacy of Ronald Reagan

Democracy Now!, February 17, 2011
“…if we gained our optimism by killing hundreds of thousands of people in Central America and destroying any hope for democracy and freedom and supporting South Africa while it killed about a million-and-a-half people in neighboring countries, if that’s the way we get back our optimism, we’re in bad trouble.” See full interview.