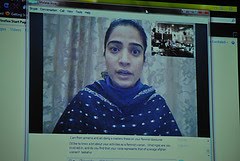 “…they can never block my voice from reaching the great and peace-loving people in the United States.”

Because the United States denied her visa to enter the U.S., Malalai Joya, an acclaimed women’s rights activist and former member of Afghanistan’s parliament, addressd an audience of over 50 for an author event at Busboys and Poets via Skype on Tuesday, March 22. The event was co-hosted by Teaching for Change and the Afghan Women’s Mission. Ms. Joya, who was named one of TIME magazine’s 100 most influential people in the world in 2010, had been scheduled to appear at Busboys and Poets in person as part of her three-week U.S. tour to promote an updated edition of her memoir, A Woman Among Warlords.

Busboys and Poets, Teaching for Change, and the Afghan Women’s Mission advocated for her permisison to travel. Determined not to let the denial of her visa be an obstacle to free speech, all three groups coordinated her Skype presentation at the scheduled time – 6:30 on Tuesday evening in DC — 3:30 a.m. for the author in Afghanistan.

Teaching for Change staff member LaTissia Mitchell described the very moving event, “The presentation and dialogue went smoothly, despite the delicate balance of technology, timing and circumstance that had to come together. Via Skype from an undisclosed location in Afghanistan, the screen all of the sudden filled with Joya’s face. She is animated and spirited, with an almost joyous demeanor. Her comments throughout were impassioned and pointed: she called for a public declaration of the Afghan war and occupation as a war crime perpetrated by the United States, she called the U.S. Embassy cowardly for denying her visa, and she let us know that everyday Afghanis are protesting both the war and the corruption of their own leadership. The collusion of mainstream media in the U.S. and in Afghanistan to silence dissenting voices was the most heartbreaking aspect of the evening. However, Joya said that Skype, Facebook, email, and the internet make it possible for peace-loving, justice-loving people to get news and information. The attendees asked questions and everyone expressed great appreciation for the opportunity to have this international exchange.”

Colleagues of Ms. Joya’s report that the U.S. embassy told her she was being denied because she was “unemployed” and “lives underground.” At age 27, Joya was the youngest woman elected to Afghanistan’s parliament in 2005. Because of her harsh criticism of warlords and fundamentalists in Afghanistan, she has been the target of at least five assassination attempts. “The reason Joya lives underground is because she faces the constant threat of death for having the courage to speak up for women’s rights – it’s obscene that the U.S. government would deny her entry,” said Sonali Kolhatkar of the Afghan Women’s Mission, a U.S. organization that has hosted Joya for speaking tours in the past and is a sponsor of this year’s national tour.

Joya is also an internationally known critic of the US-NATO war in Afghanistan. Organizers argue that the visa denial appears to be a case of what the American Civil Liberties Union describes as “Ideological Exclusion,” violating Americans’ First Amendment right to hear constitutionally protected speech by denying foreign scholars, artists, politicians and others entry to the United States.

“When we hosted Ms. Joya in 2009, the audience appreciated her honesty and courage. It is outrageous that the U.S. government would attempt to prevent this important voice from being heard,” said Don Allen, Publications Director of Teaching for Change, the co-host of Tuesday night’s event.

Addressing the closing plenary of The Left Forum in New York City this past weekend via Skype, Ms. Joya said, “Now the U.S. government tries to stop me from entering, but they can never block my voice from reaching the great and peace-loving people in the United States.”

Postscript: On March 24th, Malalai Joya was finally given a visa to the United States, more than a week after she was initially denied. Thanks to a sustained campaign that rapidly materialized through a national network of organizers, Joya is able to make it to the United States, and just in time for a major event at Harvard University featuring Noam Chomsky. The campaign to pressure authorities to grant Ms. Joya the visa was a multi-pronged one. Within days of her initial visa refusal, organizers in many states lobbied their representatives in Congress to send a letter to the U.S. Embassy urging them to grant her a visa. Following that an online petition was set up, which has been signed by over 3000 people to date. And, on Wednesday March 23rd, a national call-in day was announced, calling on Americans to flood the State Department with phone calls urging Secretary of State Hillary Clinton to grant Joya a visa.

San Francisco Chronicle article about her visa being finally granted.