Crossing Borders Through Art: The Tortilla as Canvas

Walls protect and walls divide.  Some walls are meant to protect—The Wall of China.  The wall between the West Bank and Jerusalem divides an already divided city. Other walls are meant to commemorate – The Vietnam Wall. The Western Wall in Jerusalem serves as a religious site for petitions and prayers, as do the house paintings of Muslims after they have made a pilgrimage to Mecca. Some walls serve as canvases for cultural art (Ndebele houses in South African) or as a way to express oppression (poetry walls at Angel Island).  And some walls – once symbols of division – can become symbols of peace and reconciliation (Peace Wall, Northern Ireland).

This discussion and lesson concentrates on the U.S./Mexico border and invites educators to consider lessons that stimulate discussion about walls through readings and art, using the tortilla as a canvas.

“The Mending Wall” by Robert Frost is a classic poem about a boundary or border that infers an equality of the border between neighbors – both own the land and have a responsibility to the maintain the boundary line fence between and keep their interactions as well as their fence “mended.” Even though the poem is about the usefulness of fences for neighbors, several lines in the middle of the poem contest the usefulness of such a border. The fence in the poem is a stone wall, but in terms of erecting walls at borders, it tends to take on another meaning: “Before I built a wall I’d ask to know/What I was walling in or walling out, and to whom I was like to give offense. /Something there is that doesn’t love a wall, /That wants it down.”

Frost ends by saying that good fences make good neighbors, but some walls at borders are not good fences or walls; rather, they promote mistrust and marginalization of those who are “kept out.”  Thus, we must be thoughtful and careful about the fences or walls we erect, the boundaries we keep, the borders we establish – particularly when the power dynamics are lopsided, the barriers are limiting and restrictive, and, by our actions, marginalize those on the other side of our border.

Throughout history there have been many walls and boundaries. Some remain peaceful and others cause disagreements.   Some borders are contested zones as they define the demarcated place that belongs to a country and exemplifies the difference between the two spaces and places.  Often, the more powerful country erects a wall to signify the border and only certain people can cross between the two places. The police, or the army, guard that type of border or wall.

The wall between East and West Berlin was erected in 1961 at the height of the “cold war” between the “West” and the USSR.  East Berlin was a part of Communist East Germany and an ally of the Soviet Union, and West Berlin was a part of West Germany and an ally of the North American Alliance Treaty Organization (NATO) countries of U.S., France, Great Britain, and other nations in Western Europe.  During that time, people in East Germany dug holes under the wall to form a path to what they considered freedom in West Germany. While West Germany referred to it as the “wall of shame,” it became a representation of the “iron curtain.” The wall was destroyed in 1990, and the East and West Germany were reunified later that year. Like the Israeli-Palestinian wall, this became a cement canvas for graphic mural artists to express their ideas and feelings.

A current example: between Jerusalem and the West Bank, a plan for 430 mile/6-8 meter (18-26 feet) high cement wall (about 70% completed) forms a perimeter around the West Bank to separate the Palestinian West Bank from Israel. Ostensibly to reduce the suicide bombings in Israel, opponents argue that the line used for the wall is illegal and this violates international law and attempts to annex more Palestinian land. There are now 16 Jewish settlements in the West Bank on Palestinian land.

To many people, the wall between Jerusalem and the West Bank feels like a prison and has been termed a wall of apartheid; certainly, it reinforces the power differential of the two nations and cultures – the average wage of an Israeli is $35,000 and of a Palestinian $1500 testifies to economic inequality, and the Israelis control the land, the border, the police and the water supply (Palestinians keep water tanks on top of their houses to collect rain water and the twice/week water allotment from Israel). Currently, like many walls that threatened people, the wall becomes a sight of protest, murals, and graffiti.

Background on the U.S./Mexican Border 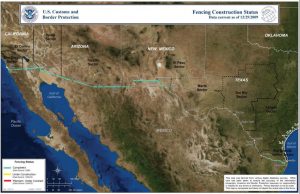 As of February 10, 2012, the Department of Homeland Security had completed 651 miles of fencing out of nearly 652 miles mandated by Congress, including 299 miles of vehicle barriers and 352 miles of pedestrian fence. For 140 miles completed in 2008, the average cost per mile of construction was $3.9 million. [Source.]

The border issue, of course, has root causes in the uneven relationship between the U.S., Mexico, and Central America. The per-capita income differential between the U.S. (over $30,000) and Mexico (less than $4,000) continues to be wide.

The summer of 2014 saw a large numbers of children seeking asylum from the devastating effects on their communities and countries of U.S. foreign policy in El Salvador, Honduras, and Guatemala. The U.S. sponsored coups and free trade agreements have led to a humanitarian crisis of significant proportions.

The questions before us as individuals, groups, and a nation are:

In examining the history, “Debunking 8 Myths About Why Central American Children Are Migrating” by David Bacon from In These Times helps clear up the media misinformation. As Teaching for Change notes in the preface: “This reality check is needed to challenge the mainstream media portrayal of the U.S. as the ‘victim’ and instead to have the information we need to find real solutions based on the root causes of this humanitarian crisis.”

Secondly, a book by Gloria Anzaldua (1987) and its second edition with Anzaldua, Norma Cantu, and Aida Hurtado entitled Borderlands/La Frontera: The New Meztiza broadens our collective understanding of the ways borders—physical, psychological, historical, cultural—interrupt interactions, reinforce apartness and difference, and cause conflict. The physical boundary created between Mexico and the U.S. created an artificial boundary, based on the agreements from the 1848 Treaty of Guadalupe. The more recent trade agreements on the heels of a long history of economic imperialism have created a hostile economic situation between the U.S. and Mexico and Central America. In the case of art, she emphasizes the cultural boundary of difference between the Latino/a artistic experiences of art as subject (fully immersing in the art) in contrast to Western European traditions of art of object.

One response to this ongoing border situation had its genesis in The Great Tortilla Conspiracy art project. The tortilla project offers a way to step into the middle of this complexity by using the familiar food of Mexico as the canvas—and suggesting that the content of the art reflect the lived experiences of crossing identity, political, and historical boundaries. By integrating self with politics and art, the barrier or boundary decreases and the shared identity and possibility becomes more a part of how we view the issues. Based on more than 40 years of using a tortilla as a canvas, the project has emphasized the power of the present to define a cultural experience and guide the artists to focus their art on both historical and current celebrations and issues.

At the DeYoung Museum in San Francisco, a border fence was erected for an exhibit of tortilla art by Armando Rascon entitled Naco Nocturnes. The subject of the exhibit was how the border functions as a site of cultural definition rather than political division.

At the Occupy Oakland movement demonstrations at Frank Ogawa Plaza in downtown Oakland, artists designed a logo for the Occupy Oakland movement, set up a printing press and printed the images (using liquid chocolate as “ink”) on tortillas. The same use of the tortilla as canvas was used in the leadership preparation program at U.C. Berkeley, in which the graduate students were analyzing issues of structural racism in a series of readings, connecting visual images to reading quotes as a text-based “unpacking” approach, and finally constructing a tortilla image that exemplified their understanding of the concept of border and boundary – either in their personal identity or in a socio-political situation, like the one we face on the border now. As this lesson is being prepared, the president has asked for $3.1 million dollars to deal with the border, and the Senate Democrats have dropped attention to many other pressing issues, including more comprehensive immigration legislation, to deal with this issue.

I invite you to help your students analyze and interrogate the concept of border, read the stories of the children and families, examine the history of the U.S. policy in Central America as it preceded and caused the border “crisis.” And then I invite you to engage your students in representing their ideas on a tortilla (real) or beige cardstock circle.

The following websites explain the tortilla project work and provide some examples of tortilla images from multiple projects. The downloadable Lesson Design, written for grades 6-12, could be adapted for grades K-5.

The Great Tortilla Conspiracy The Great Tortilla Conspiracy, a collective of artists Jos Sances, Rene Yañez, and Rio Yañez, uses the tortilla as a canvas to make art accessible to the masses. As a medium tortillas have the ability to expose the community to a wide range of issues. The Conspiracy uses their art to raise issues related to identity, immigration, miracle tortilla apparitions, the high price of tortillas in Mexico, and the rise of Transgenic Corn. The genetic engineering of corn is something that is impacting millions of people in the United States and Mexico and they address their concerns with it through their artwork and mischief.

Tortillas with a Twist A presentation by teachers from the Grand Prairie School District bout Joe Bravo and the art of Tortilla Painting presented at the 2012 TAEA Conference in San Antonio November 17, 2012.

Lynda Tredway is currently a Senior Associate at the Institute for Educational Leadership, and in her educational career since 1969 has been a D.C. school teacher, Socratic Seminar Coordinator, project director for teacher education partnership at George Washington University and DCPS, academic coordinator of the Principal Leadership Institute at U.C. Berkeley, where she helped to prepare 400 persons for administrative positions in Bay Area schools. With Norton Grubb, she authored Leading from the Inside Out: Expanded Roles for Teachers in Equitable Schools and several articles on Socratic Seminars and leadership. Her avocation: a fabric artist who makes story and memory quilts. She can be reached at lyndatredway@gmail.com for resources.