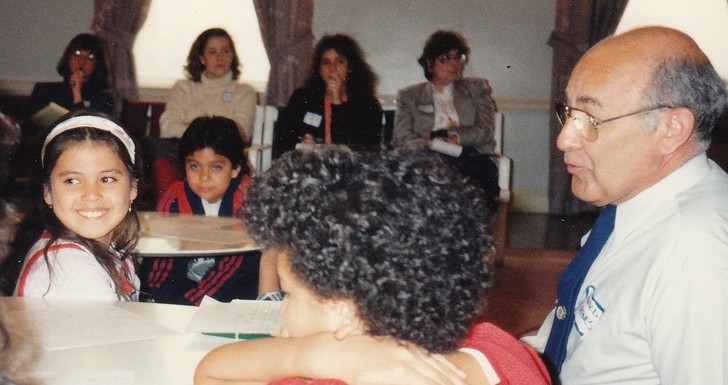 In 1989, Teaching for Change (originally called NECCA) invited Dr. Donald Graves, internationally recognized scholar on the teaching for writing, to serve as an adviser to our our newly established Books Project. Graves replied enthusiastically that not only would he be willing to advise the project, but that he would also like to visit and learn more about working in language diverse classrooms. His schedule was busy for the next few years, but he did have an opening in a few weeks.

We quickly organized a professional development workshop for teachers, administrators and professors at the George Washington University. The adults observed in fish bowl fashion as Graves held a writing workshop with a small group of ESL students from a fifth grade class at Marie Reed Elementary School. After the students left, Graves debriefed with the teacher observers.

That evening a reception was held at a room at the Organization of American States. Two students read their books and Graves gave a talk to a packed room about language and literacy. (This was the day that the US invaded Panama, so we almost lost the room to an emergency OAS meeting.) Here is a report on his visit written in the spring of 1989 by the teacher of the ESL students.

In January of this year, NECCA  joined with the School Based Mental Health Program at Children’s Hospital and the George Washington University Office for Community Services to initiate the Books Project, a pilot effort to improve literacy, cross-cultural communication and global understanding by promoting an educational exchange between Spanish-speaking refugee students in the Washington, DC area and students in Central America. A group of local educators and mental health professionals works with refugee students to write illustrate and publish books. The Books Project provides a vehicle for reestablishing a connection with the author’s country, fostering cultural pride and building self-esteem through the self-affirming experience of helping others.

The approach used to write and produce these books is modeled on the writing process as described in Dr. Donald Graves’ text, Writing: Teachers and Students at Work.

On May 12, participants in the Books Project, along with other interested educators, were fortunate to receive a visit from Graves, who is currently director of the Department of Education at the University of New Hampshire. In the morning, Graves gave a demonstration lesson with the participation of nine students from Marie Reed Elementary School, student authors in the Books Project. The session was attended by thirty local educators.

Before beginning the demonstration, Graves discussed the importance of finding out what your students know and what is important to them. He then proceeded to do just that with the nine participating students as they sat with him in a circle in the center of the room. He asked the students about life in El Salvador and their arrival in the United States. One mentioned that there had been a killing in his village, another talked about being scared on the plane trip coming to Washington. The discussion then moved on to the topics the students had written about in their books and other things that have happened to them in their lives. Graves responded to topics the students mentioned that seemed to be of importance to them, and encouraged them to explain more.

To move into writing, Graves asked the students, “What do you remember?” He shared something he remembered: his trip to Washington that morning and an anecdote about his dog. Paper and pencils were then distributed and all, including Graves, began to write. The security the students felt in Graves’ presence, the interest he showed in them, and the awareness he had led them to the stories they had within themselves, enabled them to write without hesitation, and with such enthusiasm that some even continued writing when the allotted time was over.

Following the writing, Graves and a few of the students shared what they had written. Some of the students wrote about what they had done the day before, one wrote about his dog, one about a scary dream, and another about wanting to be 15 years old and never wanting to die. The students were asked to respond to each reading, first by saying what they remembered about it, and then by saying what they would like to know more about. The responses help the author, not only to improve the writing, but also, as Graves says, because the author needs to hear that his words affect other people.

A discussion of the teaching of writing followed the demonstration. Graves answered questions about what had occurred during the demonstration and talked about his approach to teaching writing. For example: students can keep a portfolio where they put what they decide is their best work. This may be the work that will be published for others to read, or that may be used for grading.

In the afternoon, a reception and presentation were held at the OAS. Following greetings by Linda Mauro of George Washington University, Louis Carlos Chavez of the OAS, Dan F. Bonner of the U.S. Department of Education, and the two Books Project coordinators, Deborah Menkart and Edgardo Menvielle, Graves gave a talk on education and the teaching of writing to an audience of teachers, school principals, and others involved in education. Two fifth grade student authors, Sujey Delgado and Blanca Galvez of Ross Elementary School, read excerpts from their books. (See below.)

The attendance on May 12 demonstrated growing local interest in the Books Project. It is hoped that this fall the project can be expanded to more area schools.

. . . Three months after arriving to the country, they enrolled Albita in school. The school was called Adams Morgan. She went to the third grade. When Albita started school, she felt very sad, a stranger, useless. She even felt like not going to school. Schools in El Salvador were different; here they spoke a language that she did not speak. . . .  Then an American girl saw Albita without friends to play with, sad and crying. .. . The girl told her that she wanted to be her friend, and told her that Albita was pretty, and that she liked Albita’s personality. Albita jumped with joy. .. .

My granny is called Felicita Cornejo. My granny lives in the countryside on a farm. She is eighty-nine years old. . . . My granny always used to say very nice things. She used to give me a lot of advice. Whenever I felt sad, she would make me laugh. . . .

Putting the Movement Back Into Civil Rights Teaching →