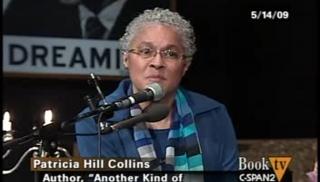 The May 2009 talk by Professor Patricia Hill Collins on Another Kind of Public Education: Race, the Media, Schools and Democratic Possibilities can now be viewed online on CSPAN’s BookTV.

Another Kind of Public Education provides a strong argument for the need to focus not on “frameworks of reform and fitting in” but instead on “how to tell a sustained story of practicing resistance.” Through her own experience she shows that public education can both silence students and teach them to resist. She outlines the ways in which young people are influenced by racism and the media, highlighting the role that schools can play to help challenge oppressive messages and make democracy a reality.

Professor Collins is one of the leading writers on African American feminist thought. Her work blends the personal and the political to draw attention to how race and gender affect our lives. Dr. Collins is Distinguished University Professor of Sociology at the University of Maryland at College Park. Among her major works are Black Feminist Thought: Knowledge, Consciousness and the Politics of Empowerment and From Black Power to Hip Hop: Racism, Nationalism, and Feminism.

← Bob Zellner on The Wrong Side of Murder Creek
Remembering Dr. Ronald Takaki →