The Teaching for Change Internship Experience 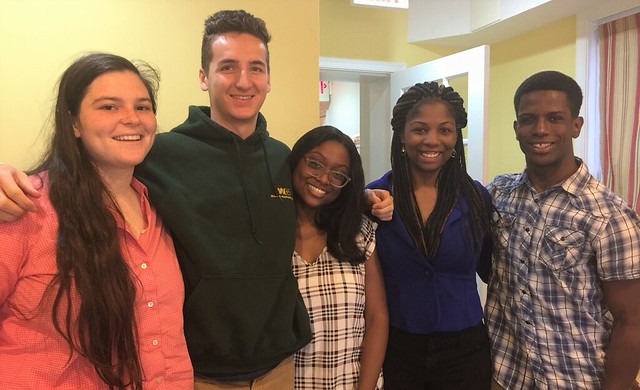 See what some past interns have said about their experience with Teaching for Change:

“Volunteering with Teaching for Change’s author events at Busboys and Poets bookstore was unlike anything I had anticipated when I took up the opportunity. Their author events aren’t held as talks or lectures, but as forums where community members discuss openly the kinds of social issues they live with every day but rarely are able to acknowledge. I not only became acquainted with the structure of nonprofit programming as a volunteer, I also learned how to meaningfully engage in my work the topics that years of formal education had never fully addressed.“

“In many ways the internship was better than what I expected. I was dreading the sitting-in-a-desk-eight-hours-each-day part. Luckily, I rarely did that! I was pleasantly surprised by the Tellin’ Stories field trips to schools. That was an incredible start to the summer – it provided evidence of the changes Teaching for Change is catalyzing and motivated me for the following weeks. I learned so much! I appreciated having substantial projects that required thought – not just menial tasks. I really appreciated the freedom to attend various events throughout DC. Additionally, I didn’t know too much about how nonprofits worked before and this summer was a great introduction.”

“Interning with Teaching for Change gave me substantive experience with a non-profit organization dedicated to progressive education. The internship expanded my understanding of the education field through conferences, meetings, newsletters, organizational networks and research.”

“My internship at Teaching for Change was extremely insightful and very rewarding. I became part of a movement that I had previously only read about: the movement to introduce themes of social justice into educational institutions… Internships are supposed to give interns a chance to do work that they normally wouldn’t be able to do at an entry-level position. Teaching for Change did just this. It gave me an opportunity to do more work at a professional and mature level than I could have ever hoped for.”

← Selma in Kosciusko
Lessons of Vietnam: Power of Protest →