KidsPost Says Slavery was a “Mistake” 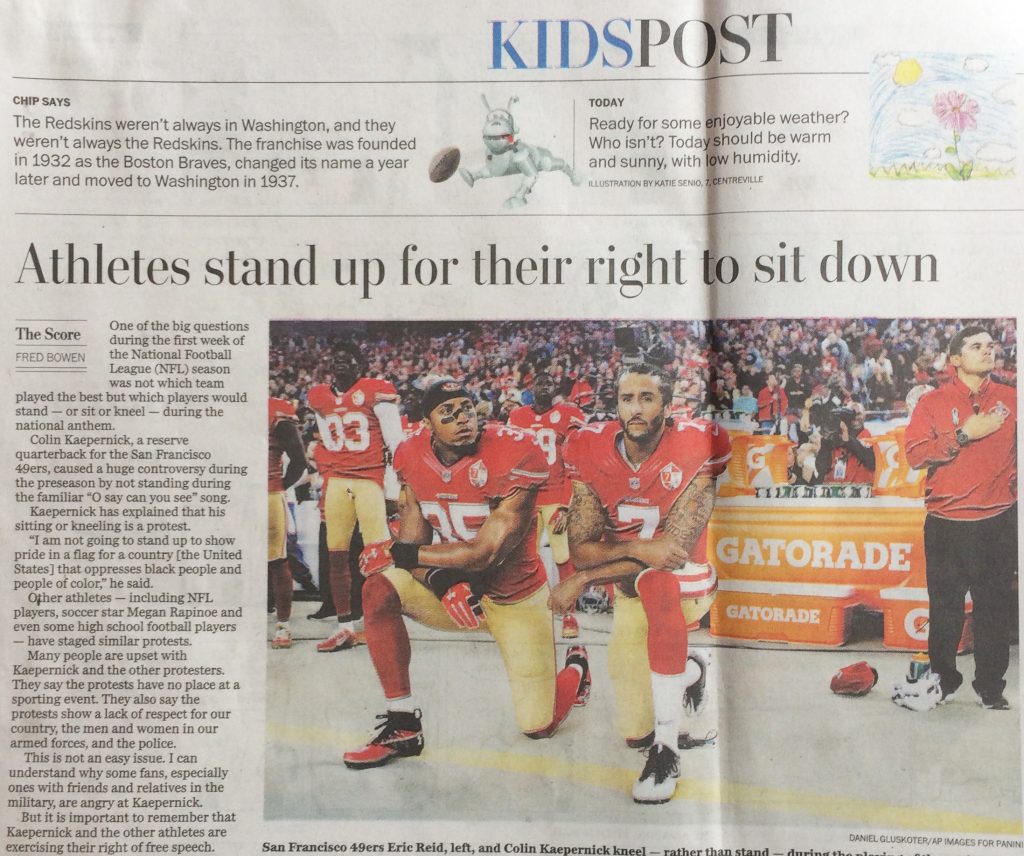 The September 14 edition of the KidsPost featured an article on Colin Kaepernick and other athletes who are taking a knee during the National Anthem. While we commend the Washington Post for addressing this topic in the kid’s section of their paper, their approach mis-educates the reader. Here is the explanation by Fred Bowen in the KidsPost for why people have spoken up throughout U.S. history,

Take a look at the language. “The United States allowed slavery until just after the Civil War (1861-1865).” The U.S. government did not simply “allow” slavery — it enforced and profited from it. And “until just” makes it sound like it was a short period of time. How about, more accurately: The United States was built on a slave economy and was engaged in the sale and forced labor of human beings for many generations. Of course, that would not count as a “mistake.”

We understand the need to introduce history in a developmentally appropriate way and to shelter young readers from graphic descriptions of violence. However, the KidsPost’s sugarcoating and passive language seems motivated more by a desire to protect the mythology of U.S. exceptionalism than it is to protect young audiences.

The statement that the “government took land from Native Americans” also needs to be rewritten. (And the references to women and wars.) Take a moment to try it. This would be a good exercise for elementary to high school students.

What does the article say about contemporary police violence, one of the main reasons Kaepernick took a knee? Nothing. Absolutely nothing.  Young readers are left to assume that the “mistakes” of the past must have all been fixed since there is no reference to contemporary oppression.

At Teaching for Change, we believe students should have the opportunity to learn the truth about U.S. history and the present. That is why we partner with Rethinking Schools to offer lessons and recommended books on people’s history for K-12 on our Zinn Education Project website. To date, 63,000 teachers have signed up to access lessons and about 20-30 more teachers sign up every day. It’s time for the KidsPost editors to learn some people’s history as well.

Here is the text from the KidsPost article referenced above.

← A People’s Collection and Narrative: NMAAHC
“One of the Best Nonprofits” According to Catalogue for Philanthropy →