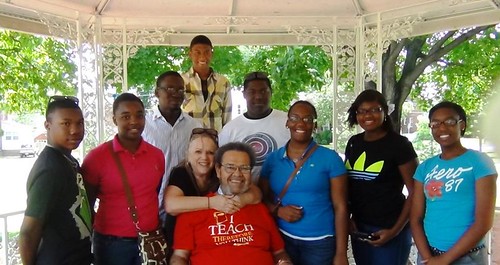 We were saddened to learn of the death of lifelong activist and freedom fighter Lawrence Guyot, who died on November 23, 2012. Born in Pass Christian, Mississippi, Guyot dedicated his life to the fight for voting rights, first with the Student Non-Violent Coordinating Committee (SNCC) and the Mississippi Freedom Democratic Party (MFDP) and then for decades in Washington, DC.

We at Teaching for Change were honored to work with Lawrence Guyot in his role as an advisor for our publication with PRRAC, Putting the Movement Back into Civil Rights Teaching. As with all his work, Guyot took on this role with extraordinary dedication. Not only did he provide detailed advice during the production of the book, he also threw himself full force into its promotion so that it would be read and used in schools across the country. He took copies with him everywhere he traveled, coordinated book signings, helped facilitate an Advisory Neighborhood Commission (ANC) donation of books to schools in DC, and managed to slip in a reference to the book every time he was interviewed by the press.

In his memory and to continue his legacy, we encourage teachers to make sure students learn about the Student Non-Violent Coordinating Committee (SNCC), the Mississippi Freedom Democratic Party (MFDP), and the fight for statehood in our nation’s capital.

You can learn more about Guyot’s work at the invaluable website, Civil Rights Movement Veterans (CRMvet.org) and in the growing number of obituaries and testimonials to his life. Here are just a few:

← Testifying Against D.C. Public School Closures
How to Build a Better Parent-Teacher Night →