Malcolm X: Written Out of History 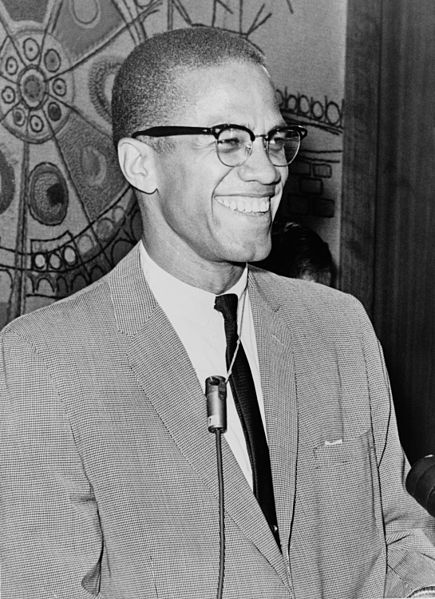 During a book talk for Waiting ‘Til the Midnight Hour: A Narrative History of Black Power in America, historian Peniel E. Joseph critiqued how textbooks typically invite students to contrast Martin Luther King Jr. and Malcolm X, as if they were polar opposites.

We share this excerpt from Joseph’s talk in light of the news that a Queens, New York 4th grade class was told that Malcolm X (El-Hajj Malik El-Shabazz) could not be included in their Black History Month assignment. According to an ABC news report, the reason given is that Malcolm X was “bad” and “too violent,” and therefore not age-appropriate,

This school is not the exception nor is the teacher to blame given the mis-representation of Malcolm X in textbooks and mainstream media. As Joseph explains, Malcolm X  is largely written out of history, and when he is included, he is the “iconic prophet of rage.”

What I want to talk about today is Martin and Malcolm and while acknowledging the divergences, really look at the way in which their political lives at times intersect and the way in which the movements that both men led, both antagonize and inspire each other.

We usually think about Martin and Malcolm in polar opposites, people are either Malcolmites or they’re for Dr. King and even the partisans don’t realize how nuanced and how complicated and how rich these men’s lives and political activism were.

Here is the problem with that. King is consistent in calling for the radical transformation of American democracy. Malcom X is talking about pan-Africanism, robust radical self determination, really confronting American democracy’s jagged edges. Both political activists are going to be talking about social, political, and cultural transformation. King is going to argue that American democracy is resilient enough to make changes that are vital to the health of that democracy. Malcolm X is going to be skeptical of democratic principles and traditions, and their resiliency.

What we see are two political activists who are trying to shape and transform the very infrastructure of American democracy. Certainly Malcolm’s attempts at transformation utilize rhetoric that’s much more blunt, rhetoric that’s much more candid, but it’s also in service of a radical project for human rights. For the 21st century, activists who are advocating for racial justice and political empowerment actually need both aspects of these political icons and their thought.

So when we think about King and Malcolm, and I’ll close here, in a pre-multicultural age, where race shaped hope, opportunity, and identity, both Martin Luther King Jr. and Malcolm X attempted to redefine both black identity and American democracy and in the process the political activism and reverberations of both of these political activists would scandalize and transform American democratic traditions and principles.

← I Didn’t Know There Were Cities in Africa!
Pete Seeger, Presente! →