The Civil Rights Movement Is Not Over: Mark Levy Says at the AFT 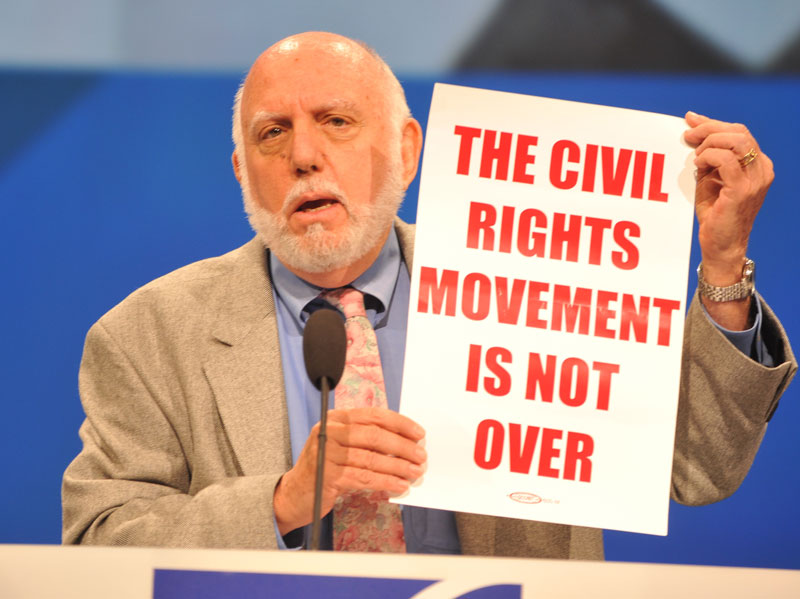 Freedom Summer volunteer Mark Levy spoke at the national convention of the American Federation of Teachers (AFT) in Los Angeles on July 12, 2014 about the legacy and lessons of the modern Civil Rights Movement. Levy is a veteran junior high school teacher and labor organizer.

GOOD MORNING! I hope you enjoyed that video clip.

I recommend everyone here see the full PBS documentary Freedom Summer where many of the video segments came from. I’d also recommend showing that film in your classes.

I want to thank AFT for commemorating Freedom Summer. However, I do want to emphasize that Freedom Summer should be remembered as one moment in a long—and still ongoing—struggle.

I’d like to acknowledge all the AFT members who went to Mississippi in 1964.  About one third of those teaching in the Meridian Freedom School with me were UFT members. Sadly, too many from the AFT who went south and served all over Mississippi have passed away, or are too ill to come here today.  I hope I can speak for all of them.

I think it important, also, to point out that not all AFT volunteers went to teach in Freedom Schools–a good number chose to do full time organizing for voter registration and the Democratic Party challenge.  I believe that door knocking and voter organizing is another proud venue for teaching. 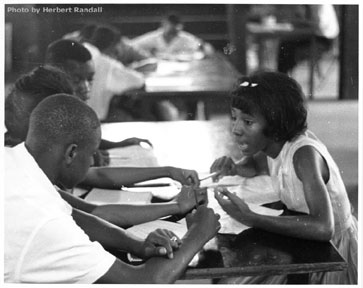 Charlie Cobb Jr., of SNCC, whom you just saw in this clip, originated the idea of the Freedom Schools as being much more than just schools:

Let me ask:  How are our schools doing these days empowering students and encouraging critical thinking?

Vincent Harding and Teaching for Change

Now, I want to say: I agree with Vincent Harding when he wrote: “We are all teachers.”

That gentle and persistent warrior, teacher, and guide, says that:

People-who-talk-to-people and pass along stories and lessons not only are teachers, but—as Harding wrote—have a mandate to share the lessons of the Movement.

And as Teaching for Change encourages us in telling that narrative: “We have to put the Movement back into Civil Rights teaching.”

Sad When I Hear 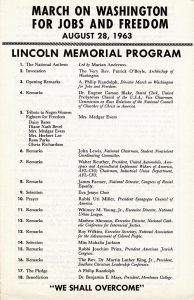 So I get very sad these days when I visit schools and talk to students and teachers and hear things like:

Or the more cynical:

Sadly too, when I ask the official name of the 1963 March on Washington, I get:

Hardly anyone knows the truer and more radical and unified demand for “Jobs and Freedom.” The two ideas that: a) the March included an economic aspect of “Jobs” for all; and that b) “Freedom” is more than merely legislated “civil rights”—are obscured. That important connection between the two issues, Jobs and Freedom, and the possibilities that come from linking them, gets erased from our textbooks and lessons.

We Must Correct That Narrative

So, as teachers and story tellers, we all better get clear on the narrative we want to pass along.

We need—in fact, we have an obligation—to say that:

You know, when I was a young activist in Mississippi fifty years ago, I worried about guys in white robes and pointy hats sneaking around at night.

Now, as an older retiree, I worry about the power of five guys in fancy black robes in DC—and how they are taking away the things we thought we had won.

We have to ask why?

Why are the rich and powerful working so hard and being so afraid of letting everyone vote? Think about that.

We have to say:

It really does make a difference who gets elected and gives those five black-robed men such power to wreck havoc on our rights and our past victories.

When we share the true story of the Movement—as a “movement”—then we can pass the encouragement on to others: 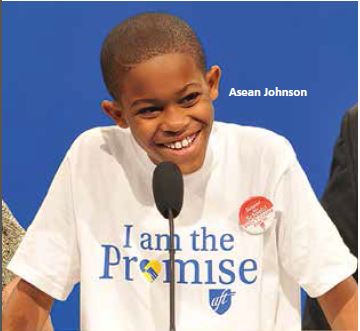 So that brings me to the best part of my short talk today.

I get to pass the baton to those who will continue the fight.

Many of us in this hall traveled to Washington, D.C., last August to mark the 50th anniversary of the March on Washington. This is the placard they gave me on my PSC/CUNY union bus last year—and that I proudly carried all day.

It’s true: “The Civil Rights Movement (unfortunately) Is Not Over.”

If you were there, you know our next speaker.

If you are from Chicago and fought against the mass school closings and layoffs, you know our next speaker.

At the ripe old age of 11, he is a leader and advocate for Chicago’s public schools, its neighborhoods, and its hard-working educators. [See speech by Johnson at age nine about school closings, here.]

It is only fitting that he is joined by AFT Vice President and Chicago Teachers Union president, Karen Lewis and national director of the Journey for Justice Alliance, Jitu Brown.