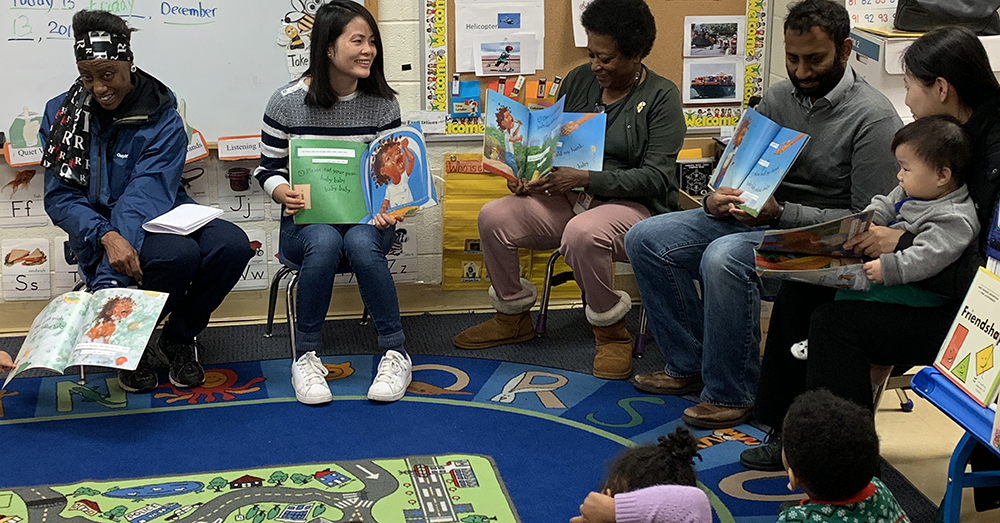 On December 13, 2019, parents gathered in the parent center at Thomson Elementary School (DCPS) to review books in preparation for Roving Readers, a signature activity of Teaching for Change’s family engagement project. Thomson parents have been participating in Roving Readers for so many years that having parents read in the classroom has become a part of the school culture. The multilingual aspect of the program, particularly at a school with a very diverse population like Thomson, is a big draw for parents, students, and teachers alike. The students are so accustomed to hearing books read in four languages (English, Spanish, Amharic, and Mandarin) that some are disappointed when they are occasionally only read to in three languages.

This month parents were reading Please, Baby, Please by Spike Lee and Tonya Lewis Lee to pre-K and kindergarten students, and Hey Little Ant by Philip and Hannah Hoose to second-grade students. The parents read in English, Spanish, and Mandarin. Each class had a few students that understood the books in Mandarin, which was powerful to see given that gentrification is steadily decreasing the Chinese population in the Chinatown neighborhood where Thomson Elementary is located.

After listening to Please, Baby, Please, pre-k and kindergarten students discussed the ways that they have changed since they were babies. Some said they no longer drink out of bottles, while other students said they cry less.  One of the parents brought her infant son along, who sat in his sister’s lap while parents read to her class.

A student in the second-grade class arrived late and missed the beginning of the story. He was so upset because he loves to hear the different languages. He made us promise to come again and make sure he is in class. This particular student is a monolingual English-speaker, but his face always lights up when the parents read in Mandarin, Spanish, or Amharic. It was a reminder for all of us of the impact and importance that the parent read-alouds have on all the students, not just those that speak other languages at home.