Remembering the Everyday Heroes of the Civil Rights Movement 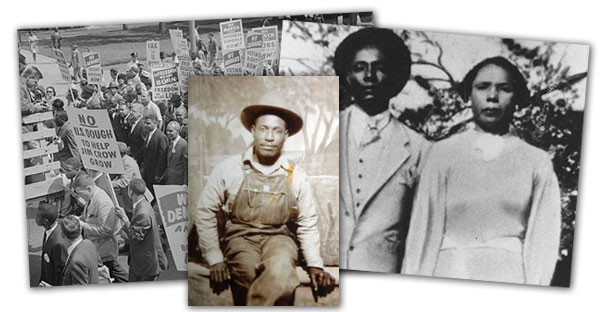 The following article by Courtland Milloy was published by the Washington Post on August 27, 2013. Milloy quotes Teaching for Change’s executive director, Deborah Menkart, and references the March on Washington interactive quiz and a lesson plan that Teaching for Change prepared as resources to help teach about every day heroes and the struggle for justice.

Lt. Col. Lemuel Penn, a D.C. schools administrator, was murdered in 1964. He was returning home from a military training session in Madison County, Ga., when Klansmen shot him from a passing car.

William Lewis Moore, a white postal worker from Baltimore, set out in 1963 on a one-man march to protest racial segregation in Alabama. He was planning to deliver a letter to the governor and made it as far as the small town of Attalla before Klansmen shot and killed him.

Cpl. Roman Ducksworth Jr., a military police officer stationed at Fort Richie, Md., was on a bus in Taylorsville, Miss., in 1962. A police officer thought he was a “freedom rider,” ordered him off the bus and fatally shot him.

Those are just some of the people from our area who in one way or another suffered and sacrificed during the civil rights movement. Their fates are reminders that the shootings, beatings and bombings weren’t just a few horrific incidents. The violence was pervasive and random, as well as targeted, deadly homegrown terrorism often carried out with impunity.

Except for a few panel discussions, the commemoration of the 50th anniversary of the March on Washington — actual date Aug. 28, 1963 — seems to have pushed the malevolence of the era into the background. The blood-soaked civil rights movement has been reduced largely to boycotts, marches and speeches.

But make no mistake about it: The gathering in Washington 50 years ago wasn’t just about one man’s dream.

Not surprisingly, we mark the red-letter dates in civil rights history pretty much the way it is taught in our public schools. It is filled with myths and omissions. Rosa Parks becomes the “mother of the civil rights movement” for refusing to give up her seat on a bus in December 1955. Or was it Mamie Mobley who gave birth?

Mobley was the mother of Emmett Louis Till. Her decision to have an open-casket funeral for the 14-year-old boy — his face grotesque from a lynching in Money, Miss., in 1955 — steeled the spine of black America and really got people moving.

A question not likely to be asked in school: Is it just a coincidence that the March on Washington was held Aug. 28 — the same date of Till’s murder?

“We can use moments like the March on Washington to look at the people’s history that’s been left out of the textbooks,” said Deborah Menkart, executive director of Teaching for Change. The Washington-based organization provides parents and teachers with tools for learning about everyday heroes in the struggle for justice.

Among the materials it offers is an interactive quiz about the 1963 March on Washington.

There’s also a lesson plan that helps students put the violence of the era in perspective by taking on the roles of unsung martyrs. “Murder Mystery: Shining a Light on the Story That the Newspapers Left Out” deals with one of the most significant though underreported events of the civil rights movement — the slaying of Mississippi voting rights activist Herbert Lee in 1961 and the subsequent murder of a witness, Louis Allen.

The study begins with a quote from Robert Moses, a voting rights organizer with the Student Nonviolent Coordinating Committee and a friend of Lee’s. (Moses is the founder of a national math literacy program called the Algebra Project.)

“I remember reading very bitterly in the papers the next morning, a little short article on the front page of the McComb Enterprise Journal, that said: ‘the Negro had been shot in self-defense as he was trying to attack E.H. Hurst,’ ” Moses writes. “That was it. . . . Our first job was to try to track down those people who had been at the shooting, who had seen the whole incident.”

In piecing together what happened to Lee, students — and parents — learn about the ways that violence was used to intimidate and strategies that were devised to continue voter registration drives despite the risk of death.

“Learning about the courage shown by civil rights activists is inspirational, and knowing how they were able to organize is empowering,” Menkart said. “Students come away with a much better understanding of the role they can play in carrying on the fight for justice.”

On Wednesday, President Obama will deliver a speech commemorating the 50th anniversary of the march. He will be joined by past presidents as well as Hollywood stars such as Oprah Winfrey and Forrest Whitaker. I hope their presence will help bring much deserved attention to the event.

Missing from the spotlight, however, will be the legions of everyday heroes who never received the recognition they deserved. Most are no longer among us. But many still are. Until we know more about them, we’ll never know what the march was really all about.

← “Did You Know?” Myths and Facts About the 1963 March on Washington for Jobs and Freedom
Learning About Mary McLeod Bethune: Educator and Activist →