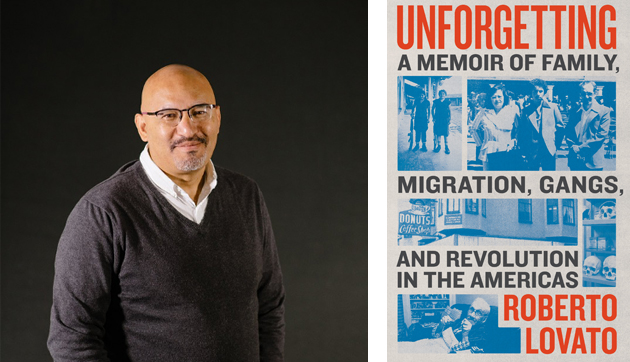 On October 6, during Teach Central America Week, Teaching for Change and the Department of Spanish and Portuguese at the University of Maryland, College Park hosted Salvadoran American journalist Roberto Lovato for a virtual book talk about his new book Unforgetting: A Memoir of Family, Migration, Gangs, and Revolution in the Americas.

Over a hundred participants attended the event from cities and states across the country, including Virginia, Pennsylvania, Wisconsin, Hawaii, Texas, Illinois, and the author’s beloved state, California.

The event was moderated by Teach Central America advisor, Ana Patricia Rodríguez, associate professor at the University of Maryland School of Languages, Literatures, and Cultures where she teaches classes on Central American and U.S. Latina/o literatures and cultures.

A recording of the full event can be viewed below. Select CC for closed captions.

The two began the conversation discussing California. Rodríguez welcomed the participants and explained:

The city [of San Francisco is], probably the most historical city of Salvadoran arrival, dating back to the 19th century, if not earlier. So, in his book, for those of you who are reading it and those who are about to embark on the reading. It’s quite a treat to get a historical panorama of that migration.

When asked how San Francisco and El Salvador have shaped his identity, Lovato candidly shared,

Thank you, especially to Teaching for Change and all of you that have worked so hard to bring what for some of us was a dream. I’m pleased to share the story of my book and story in my book with you in my humblest most heartfelt effort to kind of do some narrative healing.

Lovato highlighted the need for representation and narrative healing across writing forms as he brought the group’s attention to recent coverage of the inhumane treatment of asylum seekers across the country and at the U.S. border. Lovato stated:

Of the people that were in those cages, in those concentration camps, in those migrant prisons. I don’t call them detention centers, I refuse to. I’ve been there and they’re not that.

If you look at who’s in there (at the time, 90% of them were Central American), there’s a mismatch between the people being storied and people telling the story in journalism and I saw the same thing in literature. And so I wrote my book with a motive to kind of start an account or process that allows us to narrate ourselves in our own way.

The evening’s conversation continued with personal narratives and memories of the beauty and history of the Central American diaspora.

Participants shared reviews for the event. Below are a few responses:

This was a very empowering and relatable presentation. Thank you!

The most important idea I walked away were Lovato’s concepts on writing – braiding the narrative, letting storied folx tell their own stories, not including English translations (Si no entendés, go learn it!), etc.

Lovato’s breaking the mythology of Obama and listing the various “liberal” policies that impose outrageous levels of violence across Central America…once I get his book, share some of his stories with students…

I got a better understanding of Salvadoran immigrant culture and the transnational exchange element of migration. I also learned more about US involvement in Central American politics, and learned about the importance of self-expression and uncovering truths to identity and representation.

We cannot forget the true and beautiful history of Salvadorans.

Salvadorans are “a people in the constant motion of overcoming,” Roberto Lovato writes in his pivotal debut Unforgetting. In it, he runs a machete through himself and his family’s history — the 1932 Matanza, the 1980s civil war, and our present-day struggles with gang-violence and migration. With raw honesty, Lovato partakes in a much-needed excavation of what it means to be “Salvadoran” — and “American” — in this world. Unforgetting is an opening, a tear in the cloth, we Salvadorans must speak through. — Javier Zamora, author of Unaccompanied

What is Unforgetting — a coming of age story, a thriller, a slice of hemispheric history? All I can say for sure is that it’s both gripping and beautiful. With the artistry of a poet and the intensity of a revolutionary, Lovato untangles the tightly knit skein of love and terror that connects El Salvador and the United States. This book is an eye-opener into a world Anglo-Americans have been taught is enemy territory. — Barbara Ehrenreich, author of Natural Causes and Nickel and Dimed