Black History 360 at the Schomburg Center

Teaching for Change presented in July of 2014 for the second year in a row at the Black History 360: Schomburg Summer Education Institute. Thanks to our summer intern, Sarah Slichter, here is a report on the first afternoon of the week-long institute and the day of the Teaching for Change workshop on Freedom Schools and the Mississippi Freedom Democratic Party.

Williams described his philosophy: when it comes to teaching history, don’t focus on ‘coverage,’ or how many years of history one can squeeze into a semester—instead, think about ‘uncoverage,’ how a teacher can facilitate the discovery of histories with their students. Yohuru’s book is Teaching U.S. History Beyond the Textbook.

Dr. Khalil G. Muhammad, director of the Schomburg Center and author of The Condemnation of Blackness, spoke about how to teach The Case For Reparations by Ta-Nehisi Coates. Muhammad described how the article can be used by educators to challenge dominant narratives about American Exceptionalism and Individualism in favor of a deeper, and, as it happens, more accurate picture of institutional and structural oppression—carried out not only by individuals and corporations of past and present, but buttressed at every turn by our own Federal Government. Muhammad stressed the importance of expanding our collective notions of who is responsible for inequality, starting in the classroom.

“The history is not up for debate,” he said.  “The question is, are we going to teach it or aren’t we?”

On Thursday, Julian Hipkins and Deborah Menkart from Teaching for Change kicked off their session with a moving opener—asking participants to “think of someone you do this [teaching and social justice] work for,” and to bring that person into the room with them.  I could feel the change in the space, how it was permeated with new meaning once people conjured the idea of the person to whom they dedicate their hard work. 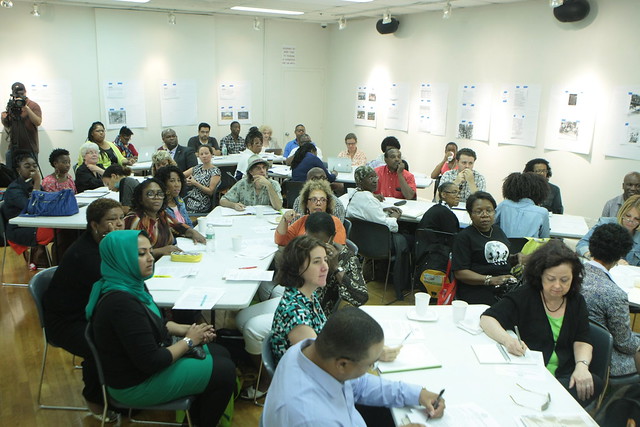 Next, there was a “gallery walk” on the history of education in Mississippi leading up to the Freedom Schools.

Over the lunch break, there was a screening of the first half of the PBS documentary Freedom Summer. It was a good reminder of the role of “ordinary people” in making change.

In the afternoon we were joined by two SNCC veterans—Muriel Tillinghast and Mark Levy.

Tilllinghast (described by SNCC veteran Dorothy Zellner: “If you want to know what courage looks like, look to her.”) started organizing as a middle-schooler, and, among other important work, was head of projects in three counties–Washington, Issaquena and Sharkey–during Freedom Summer.  Levy was the coordinator of the Meridian, Mississippi Freedom School.  Both have remained active in social justice struggles, Tillinghast as an advocate for many different issues, from tenants’ rights to AIDs; and Levy as a high school teacher in New York and an active member of the union. Both were a huge hit at the workshop. Invaluable insights were humbly and beautifully given from both.

Tillinghast was asked about the need for activists from different communities to unify around a common goal, in order to more effectively make change.“Do we really ‘need’ dogs and waterhoses to make us mobilize?” posed the asker. Tillinghast responded that movements are “made by steps, not leaps.” SNCC meetings, she recalled, were “interminable,” and coming to common ground took incessant hammering for hours on end.  She warned that “two groups using the same words does not mean they have the same meanings,” and that “steps toward commonality are built by fire by trial.”

As far as the general question about the makings of movements, Tillinghast addressed a problem in the teaching and remembering of movements: “Behind every MLK, there are 1,000 nameless people working to make change. Personality-driven history is fake.” On struggling across difference, especially racial difference, she emphasized that both parties have to work to prove to each other their willingness to change. “We ought to be able to talk about our differences.  At the end of the conversation, I should be moved, and I should see that you moved, too.” Bridging difference cannot be passive—it’s hard work.

Levy also discussed the problems of uniting across and within communities, using his work with SNCC as an example. “Not everybody’s the same. I didn’t quite understand it [when I started].” In the city of Meridian, where Levy worked, only five out of the forty churches in town allowed civil rights activities—a fact contrary to the history of universal acceptance of left organizing that we’re taught. History is messier than people make it out to be! Levy also talked about how some of the most challenging conversations he had during Freedom Summer were with his parents in New York.

The group came back together to share gratitude with Levy and Tillinghast for their time and wisdom.

We then launched into a group role-play about the Mississippi Freedom Democratic Party on this 50th anniversary of the Democratic National Convention in Atlantic City.

Participants portrayed figures who were part of the Mississippi Freedom Democratic Party movement, and people who were present in Atlantic City where the MFDP’s efforts came to a head.

As is noted in the introduction:

This lesson explores one of the most important events in the fight for true democracy in U.S. history, when a coalition of grassroots activists challenged the Mississippi political system, the federal government and the national Democratic Party that excluded citizens on the basis of race.

Working within the political “rules,” the activists formed the Mississippi Freedom Democratic Party (MFDP or FDP) in 1964 and mounted a legitimate challenge to the existing system of race-based exclusion. In the process, they garnered a national audience and sparked moral and ethical debates.

This is an under-told story of true democracy that is full of dynamic characters, and has a dramatic plot line—perfect for a role-play.

The institute participants became fully engaged in their roles. “Bayard Rustin” confronted a “Delegate” from the all-white delegation; an “FBI agent” disguised as a member of the media fed information to “LBJ.”  Participants were deeply invested in the story because they had to embody a historical actor—rather than receiving a dry lecture or reading from a textbook (although the story of the MFDP isn’t found in too many textbooks).

Half way through the interactions, participants were asked to pause and watch the actual testimony from Fannie Lou Hamer (from Eyes on the Prize) at the Convention.

They were then presented with the final “compromise” from LBJ: Two at-large delegates from the MFDP. All of the regular white Mississippi delegation, if loyal to the Democratic Party, will be seated with full privileges. Stepping back into role, the participants had a heated debate and then voted to reject the compromise, as the MFDP did in 1964. They agreed with Mrs. Fannie Lou Hamer who said, “We didn’t come all this way for no two seats when all of us is tired.”

Participants stepped back into their own shoes and wrote closing reflections on the day. First they shared some examples of what they learned.

What was the most important thing you learned from the workshop?

Then they commented on the format and content of the seminar and and next steps:

← On the Second Front of the BlackLivesMatter Movement
Thank You →