Seven Things We Learned From the D.C. Area Black Lives Matter Week of Action in Schools

In the D.C. area, Teaching for Change and Center for Inspired Teaching, with many other groups, collaborated with teachers to bring these issues and content to more than 100 schools.

Here is some of what we learned from the D.C. Area Black Lives Matter Week of Action in Schools.

1.) A Movement brings radical change to the classroom.

In many schools, the week of action opened a dialogue that led to deeper understanding of the Movement for Black Lives and the thirteen principles of the Black Lives Matter Movement. Applying the lens of the Black Lives Matter Movement sharpened the focus of Black History Month in a way we have never seen before. Going beyond the typical Black History Month “I have a dream” lessons on the Civil Rights Movement, students learned about Bayard Rustin, the Student Nonviolent Coordinating Committee (SNCC), Black Power, and Dr. Martin Luther King’s stand on the war and labor. One second grader remarked, “Black Lives Matter is like the Civil Rights Movement.”

Talking about the Black Lives Matter Movement allowed students to reflect on the long history of the Movement for Black Lives. For example, a sixth grade Arlington teacher began her lesson on the U.S. Constitution with a discussion of the Black Lives Matter Movement. The class then read Mumbet’s Declaration of Independence, the true story of an enslaved woman in Massachusetts who sued for her own freedom. After the read aloud, students read the preamble to the Constitution and discussed who wasn’t included in the “we the people” phrase. Bringing it to today, they brainstormed how they could use the Constitution to fight for justice on issues in their own lives such as sexual harassment, deportation, the Muslim ban, health care, police brutality, and the Black Lives Matter movement.

3.) Black Lives Matter is relevant to all grade levels.

The principles of the Black Lives Matter Movement were applied in developmentally appropriate ways from early childhood through high school. At one D.C. school, the community created a Black Lives Matter mural. The youngest learners contributed what is beautiful and black. Elementary students added a panel of what it takes to be alive, and middle school students expressed why the Black Lives Matter movement is important. One eighth grader reacted, “It means a whole lot that our school is honoring Black lives because I like to fight for justice.”

4.) Black Lives Matter is relevant to every subject area.

Educators used the 13 principles of the Movement to teach about a wide range of subjects during the week of action. Several educators used a lesson incorporating police violence victims’ #LastWords to write poetry, Spanish classes were exposed to the often untold Black history of Latin America, music classes held lessons on D.C. go-go music, social studies classes participated in “Resistance 101: A Lesson on Social Justice Activists and Strategies,” “Black Muslims in the United States: An Introduction,” and much more. 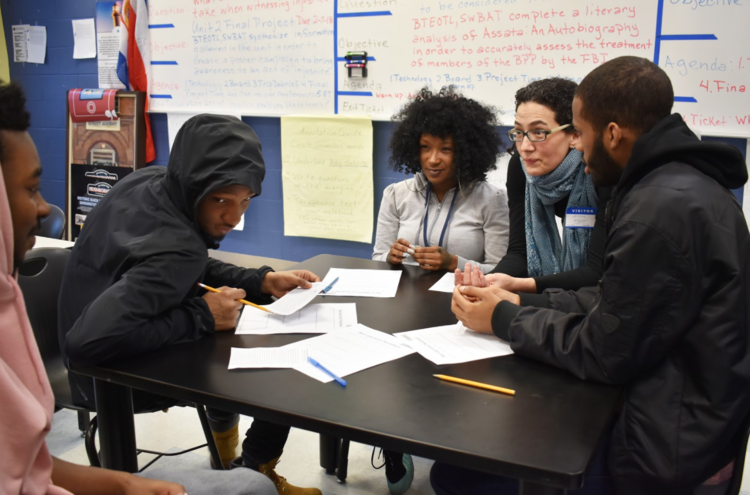 5.) The week of action opens communication between young people and adults.

Throughout the week, public events in the evenings provided opportunities for adults in the community to come together with and learn from young people. At an interschool seminar, young people and adults had honest and powerful conversations on student-selected topics including gentrification, mental illness and race, the war on drugs, and more. At a powerful open mic poetry event, people of all ages (the youngest was five years old) shared their “Love Poems for Black Women” with an enthusiastic audience. The young authors of a book about a teen who was killed by the police gave a presentation at a public library. 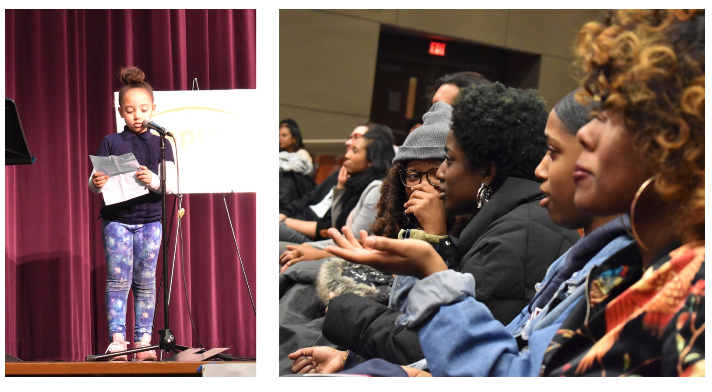 The success of the week reflected months of planning by teachers in the D.C. area. The planning meetings, which began in the fall of 2017, were convened by Teaching for Change’s D.C. Area Educators for Social Justice and Center for Inspired Teaching. During the meetings, educators established local demands, selected and developed lessons, planned events, and built community. The lessons were shared at two curriculum fairs. In advance of the week of action, teachers read recommended background reading to prepare and attended a talk on the history of racist ideas by Dr. Ibram Kendi. 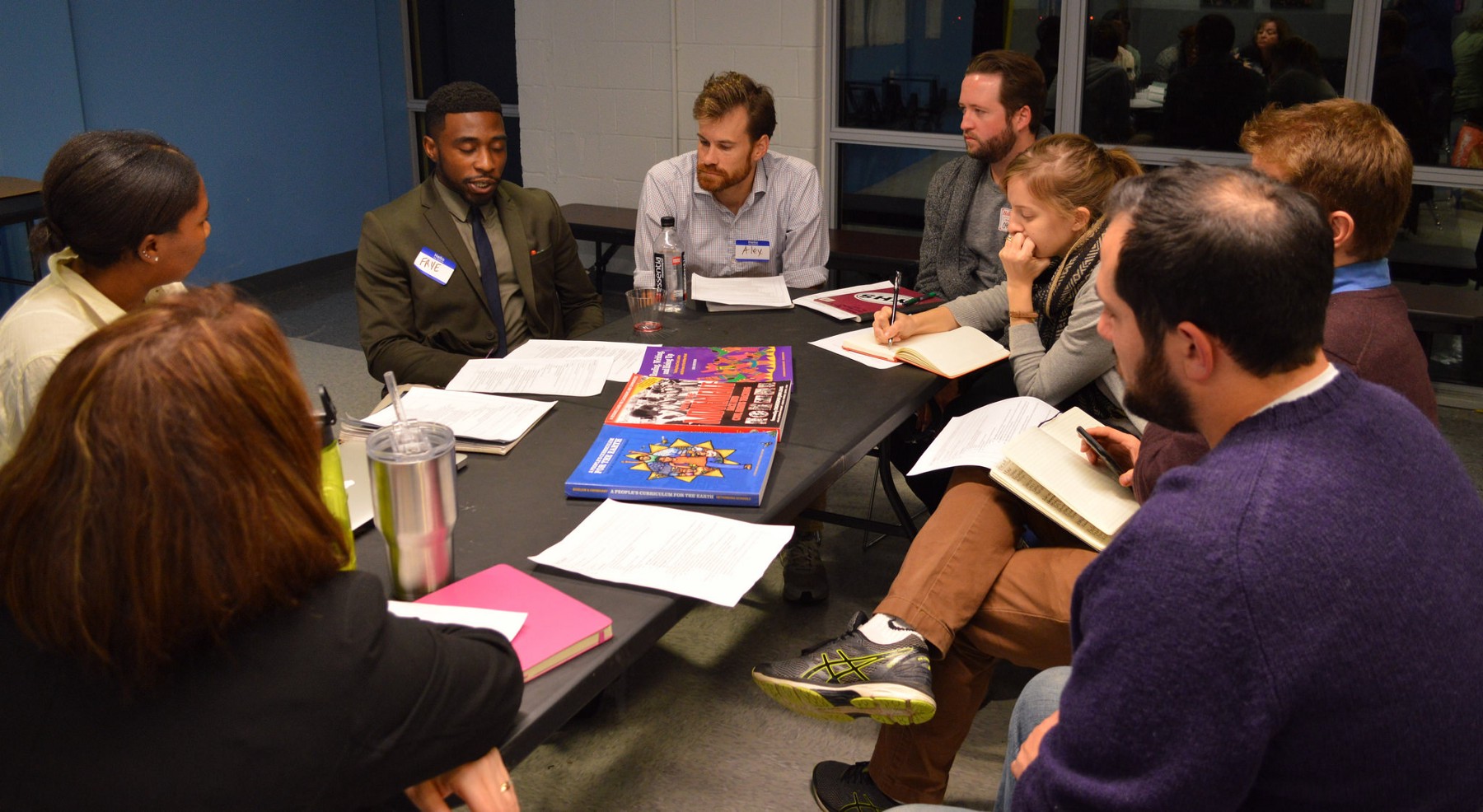 Teachers cannot do this alone. First and foremost, the local Black Lives Matter chapters need to be on board. In D.C., we had the support of Black Lives Matter DMV and the BYP100 DC Chapter. In addition, we had co-sponsorship of the Washington Teachers’ Union, the DCPS Secondary Literacy office, and endorsements by many other groups. 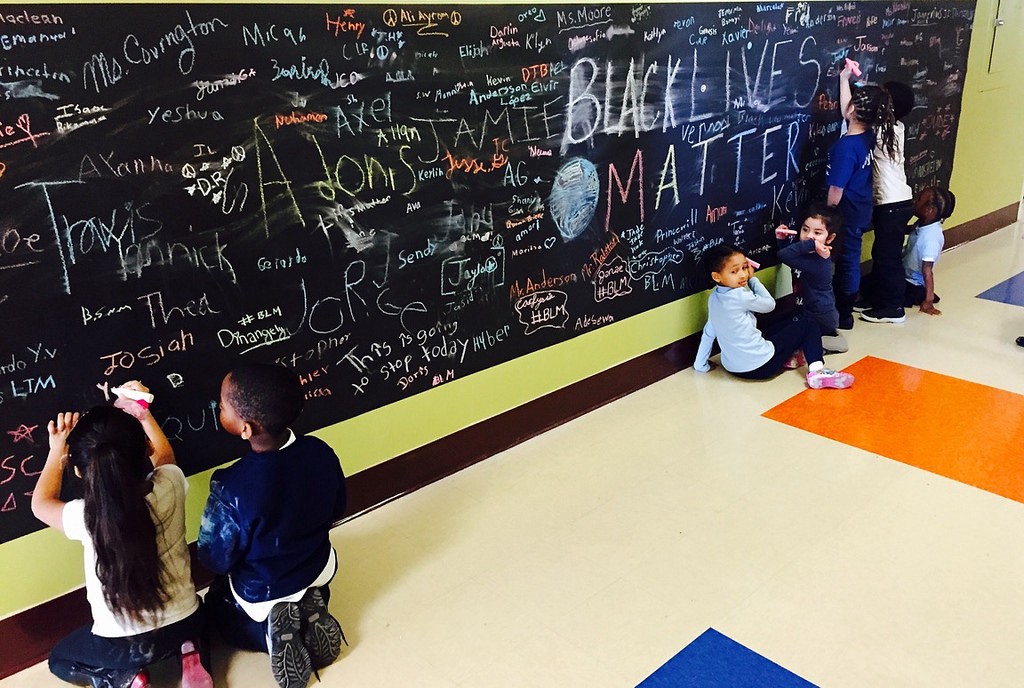 Over the last several years, we have seen the power of the Black Lives Matter Movement to raise awareness and discourse nationally about race and racism in the United States. Now we’ve seen the power these conversations can have in the classroom. The lessons and dialogues that took place during the week of action provided the momentum and inspiration to continue throughout the year.