State Out of the Union: Teaching for Change Hosts Jeff Biggers

On September 26, just days into Latino/Hispanic Heritage Month, Teaching for Change hosted an event at Busboys and Poets in Washington, D.C. featuring author/historian Jeff Biggers in a new show on immigration, civil rights, and states’ rights.

The event was a stop on Biggers’ 30-city nationwide book tour for the release of his latest book, State Out of the Union: Arizona and the Final Showdown Over the American Dream, on which the performance is based.

The evening began with the trailer for Harvest of Empire, a sweeping documentary that examines the direct connection between the long history of U.S. intervention in Latin America and current immigration challenges. Teaching for Change also acknowledged Reyna Grande, author of The Distance Between Us, who attended in support.

Poet Henry Mills warmed the audience up with a stirring piece about his mother, who fled spreading turmoil in El Salvador and eventually met his father in D.C. Before turning the program over to the main event, Mills remarked that he hoped to be a teacher one day, and that Teaching for Change would be the first place he would seek resources. 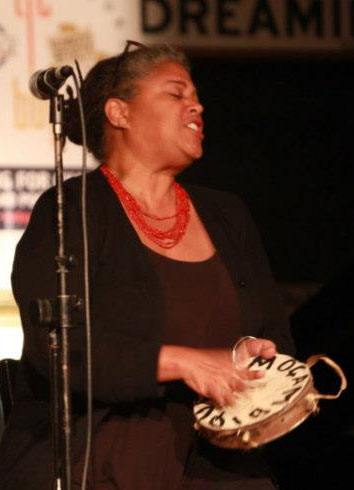 The feature presentation commenced with a stellar piece of musicianship from Mozambique-American vocalist Chude Mondlane, who performed original, multilingual songs chronicling the slaughter, displacement, and exodus of indigenous peoples.

Biggers’ storytelling dominated the small stage with inflammatory quotes from conservative pundits and politicians, stories of resistance, brow-raising statistics, and anecdotes from his travels around Arizona—all interwoven with Mondlane’s passionate musical interludes. The hour-long performance explored themes from State Out of the Union, including Arizona’s complex history, SB 1070 and its spin-off legislations, and the rapidly-changing demographics and sociopolitical climate of the nation at large, which he refers to in his book as the “Arizonification of America.”

Mondlane and Biggers stayed after the event to mingle with the audience, sign copies of Union, and answer questions. Attendees were encouraged to donate to support Teaching for Change’s new Central American history campaign as well as the Raza Defense Fund.

Pictures of the event can be found in the Teaching for Change’s Facebook photo album. 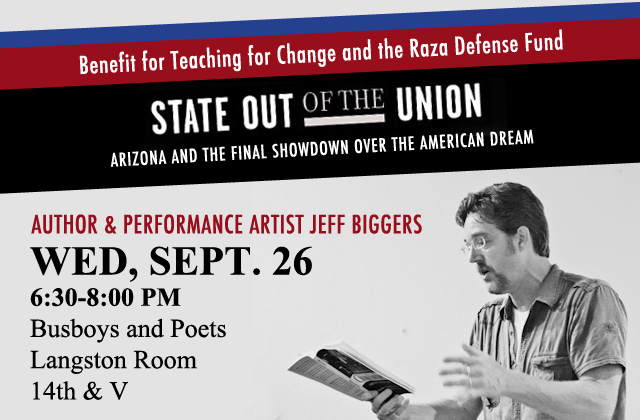 ← Join Us at “A is for Anansi: A Conference on Children’s Literature”
Are you a Federal Employee? If Yes, Select TFC on the CFC! →