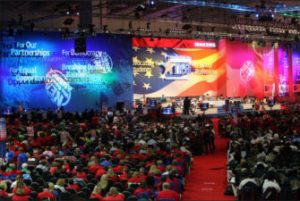 In May, the Portland, Oregon school board passed the country’s first comprehensive “climate justice” resolution. The school board voted unanimously to “abandon the use of any adopted text material that is found to express doubt about the severity of the climate crisis or its root in human activities,” and called for all schools to teach a “climate justice” curriculum. The Portland resolution said that students in city schools “should develop confidence and passion when it comes to making a positive difference in society, and come to see themselves as activists and leaders for social and environmental justice—especially through seeing the diversity of people around the world who are fighting the root causes of climate change…”

That effort received a big boost last week in Washington, D.C., when the country’s largest union, the National Education Association (NEA), voted at its national convention to support the Portland resolution and to encourage state and local affiliates to create and promote climate literacy resolutions in their own communities, using the Portland resolution as a model. The NEA has close to 3 million members, and its convention is dubbed “the world’s largest deliberative assembly,” with 7,000 delegates.

The effort to pass the resolution was led by teacher delegates from Oregon, Washington, California, Wisconsin, and North Carolina, and included members of the national Badass Teachers (BATs) caucus.

Oregon teacher Kathleen Jeskey was one of the delegates supporting the NEA resolution: “Clearly teachers from all over the country see that it is past time to teach our students the real science of climate change and properly prepare them for the future. BATs is a caucus dedicated to social justice and we realized that no other social justice issue can be dealt with properly if we ignore the issues around climate.”