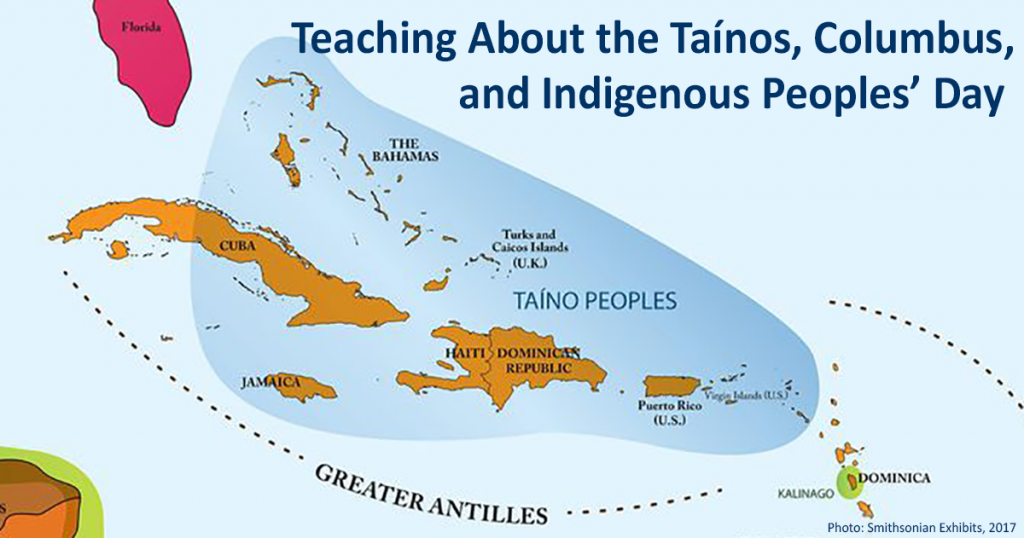 “Who knows who Christopher Columbus was?” I ask my students a few weeks before what is now Indigenous Peoples’ Day in our town.

Blank stares. Students often have pockets of knowledge that will contribute to lessons, but sometimes we have to push them to get at that knowledge.

That works better. Junior, a student from Cape Verde, responds with “Marinheiro!”

“Yes, he was a sailor. What else do you know about him?”

I begin to fill out the K-W-L (know, want to know, learned) chart that I am modeling on the whiteboard for the students and indicate that they should do the same. When I originally taught this lesson, it had not occurred to me that my students wouldn’t know Christopher Columbus by his Americanized name.

After a few minutes, I ask the students, “What about the Taíno people? Who were they?”

Maricela’s hands shoot up. “The people who live in Puerto Rico antes!” Being Puerto Rican, she has heard and learned about the Taínos, whereas the other students in my class have no idea. “Muy bien, Maricela. Antes is ‘before’ in English. Let’s add Maricela’s information to the ‘know’ column.”

I tell the students, “The Taínos were the people who lived on the island of Puerto Rico before anyone from Europe came. There were indigenous people, gente indigena, all over North and South America, for thousands of years. Do you know anything else about the Taínos, Maricela?”

Most typical readings about the conquest of the Americas in social studies textbooks begin with the actual conquest itself as if history did not exist before the conquest happened.

In my unit, the narrative is flipped; it begins with a description of Taíno life on the island of Boriken, the Taíno name for Puerto Rico.

After we complete the K-W-L chart, I present the students with some of the relevant vocabulary.

“First, I want everyone to translate the word in the left column to your language,” and I show them what I mean by translating the word “indigenous” to “indigena.” This way, my students see that “indigenous” is a cognate (for most of them), and the students who have more academic literacy can draw on their backgrounds.

“In the third column, you should draw or cut and paste a picture of what the word is.” This helps the students have a concrete image related to the word. At my school, all students have Chromebooks, so we have the option of doing this electronically or on paper.

After spending a class or so on vocabulary, I have my students read aloud together.

First, they read about the Taínos, the largest indigenous group on the Caribbean islands. The text describes their housing, agriculture, sports, language, and more. The second reading describes the arrival of Columbus and his use of violence against the Taínos in his pursuit of profit and domination.

As we read, Monica blurts out, “So Columbus was bad?”

“Well, Monica,” I say, “it is more complicated than good and bad. Let’s keep reading and as you learn more, you can decide how you feel about Columbus.”

I think about my town, and how several years ago, first the schools and then the town officially changed Columbus Day to Indigenous People’s Day. Cities and towns across the United States are following suit. Thus, it is essential to teach the history of indigenous people in the Americas so that students can understand the reasons behind this change. In addition, as more Puerto Ricans are arriving on the U.S. mainland as environmental refugees in the wake of Hurricane Maria in 2017, there is an urgency for teachers to educate themselves and their students about Puerto Rico and its complex history of colonization. Teachers can use this lesson about Taínos and Columbus as a way to approach these topics and to affirm the identities and history of our students with Caribbean heritage.

As my students continue reading, highlighting and making comments, I feel confident they are getting a more modern and socially aware view of the Caribbean islands before and after the conquest.

Estimated time for the entire lesson: 4 one hour classes for beginning ELL students at the grade 7-8 level.

Prior knowledge questions activate students’ background knowledge and recognize that students have information to contribute. Some students will say, “I don’t know anything about the Taínos,” but with some prompting and probing questions, they can often come up with something.  Teachers can choose to either ask questions orally of the students, have students write the answers to the questions below, or complete a K-W-L chart. Teachers can ask questions such as:

After teaching this lesson a few times, I also realized that it goes much more smoothly if students have a basic understanding of world geography. This is not always the case, though, in particular when there are Students with Limited or Interrupted Formal Education (SLIFE) in the class.

Often, there are a few stronger or more daring readers even if they are beginners. This is a great way to practice oral skills. Along the way, we stop often, checking in for comprehension. While time-consuming, English Learners at this level benefit from this sort of reading more than from reading silently. Students who are stronger readers and more advanced beginners can usually tackle the longer paragraphs, while students who are still true beginners can take on smaller parts with help.

“Students, remember to ‘talk to the text’ as we read!! Use your colored highlighters or pens to underline, circle, ask questions, draw pictures, and define words you don’t understand.” I model the technique, which I use often, on the overhead projector.

This strategy is commonly known as active reading or annotation. I model the technique by projecting the text onto the whiteboard and asking the students what they think we should highlight, circle, and underline. At times, the words I chose to pre-teach are not the same ones the students have trouble understanding; Google images come in very handy for this, and I do a quick search to show the students an image that will help them understand.

Questions for Discussion and Comprehension

These questions serve to gauge the students’ understanding of the readings and to get them to think more deeply and critically about the Taínos and the arrival of Columbus. Teachers can modify the questions depending on their students’ English level and grade.

This activity is designed to prompt students to think about different viewpoints while starting to develop their academic language. Teachers can modify the activity depending on their student groups. Even beginner ELL students can understand most of the images and make some comments about them.

Rethinking Columbus: The Next 500 Years, which includes “The Taínos: ‘Men of the Good,’” by José Barriero; a critical reading activity of Columbus’s diary on his first contact with Indigenous people; a timeline of Spain, Columbus, and Taínos with teaching ideas; and an adaptation from the writings of Bartolomé de las Casas on the first Spanish priest to denounce the Spanish brutality in Hispaniola.

“Indigenous Cuba: Hidden in Plain Sight” by José Barreiro for the Magazine of the National Museum of the American Indian

Whose History Matters? Students Can Name Columbus, But Most Have Never Heard of the Taíno People by Bill Bigelow for the Zinn Education Project.

Alicia Lopez is an ELL teacher at Amherst Regional Middle School. Her 23 years in the classroom span two states and three subjects (French, Spanish, ESL). She has also worked as an administrator and is currently a lecturer in Professional and Graduate Education program at Mount Holyoke College. She received her B.A. in French and Anthropology at Wellesley College and her Master’s in Bilingual, Multicultural and ESL Education at the University of Massachusetts. Alicia lives with her husband, three kids, two dogs and two cats in Amherst. She writes a blog about teaching, Maestra Teacher and is publishing a book with Sonia Nieto called Teaching, A Life’s Work: A Mother-Daughter Dialogue (Teacher’s College Press, 2019).