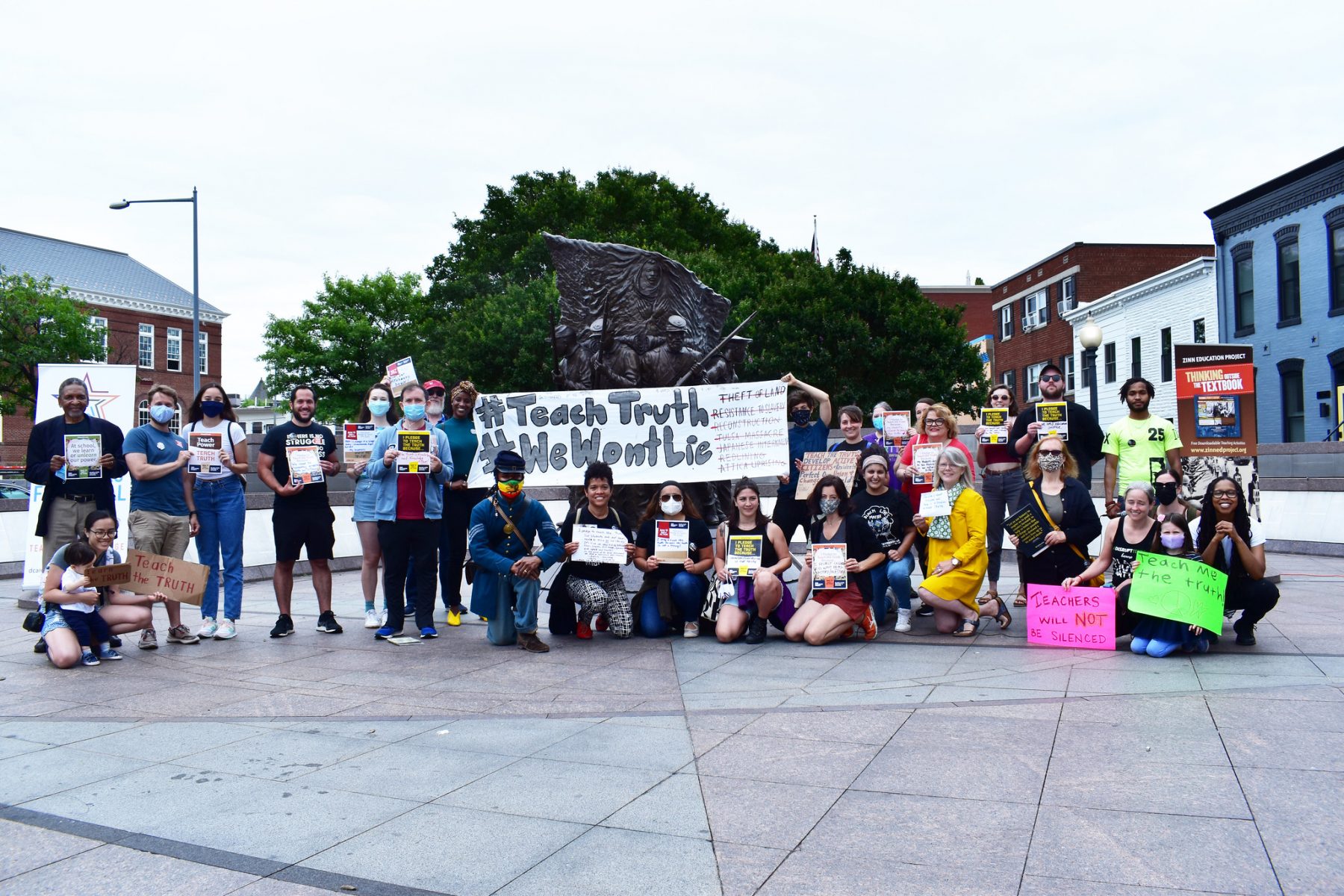 Parents and great grandparents, which I am, we are kids first teachers, you are our second teachers, but our kids, our parents, our first teachers, and so. But let me also say one other thing, which I said a few days ago, and that is that, that this society, I think probably all societies, depend upon our teachers to pass along those values of society. The great values. We depend upon them to pass on those common values. That’s a very interesting point isn’t it? Parents teach. We teach from one point of view. We go to church, our churches teach from someone’s point of view. But society, community… community has to have some way to pass on its values. And that, we have charged our teachers, our school system with that.

And having grown up in a little town called Newnan, Georgia, having walked to school for the first four years of my life, while white kids rode to school. I know they rode to school, because they passed me every day on the school bus. I had one teacher who taught seven out of seven grades. They had teachers, they changed classes, I’m told I never went into that school, but I don’t know what they did. But I know they took my daddy’s tax money, bought buses and books for white kids, and they did not buy any books for Black kids. We got hand me down books. We knew they were hand me downs because they had the kids names in them when we got the, right. And they had some kind of pages were missing, but we took those little books and we walked to school with our bags in our hands.

And I managed to finish high school at the age of 16. I went off to Morehouse College, in 1959. Joined the Civil Rights Movement. Joined SNCC because I was sick and tired of being sick and tired. I wanted the place to change, and somebody had to change it. And so that was when I really got a real introduction to how the school system works. I knew about the political side of it. I knew we didn’t have any buses, some people got buses, some people didn’t. But I also knew, I learned later on, that they actually…somebody read the books first. They censored those books. That’s what they’re talking about doing with the Zinn [Education] Project. Y’all know that right? With the 1619 Project. They’re talking about censoring this book, this this teaching material, and making it illegal to teach in these schools what these young people need to know about this country. Now, we can’t have that, we got to stop that. And all of us can stop that as long as you keep fighting, keep fighting, keep fighting. Because this ignorance is never going to go away. The ignorance is not going to go away until people are taught something better, and something different. And this is what we have to do, we have to teach the truth. And we have to find a way to make it all happen. 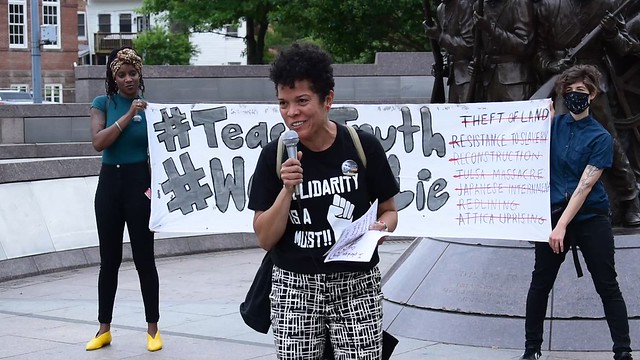 (Photos from the event.)

And let me just close with one final example about about something that we do here at the African American Civil War Museum. I’m 78 years old now, and I get invited back to Georgia every now and then to say something to people about what I’ve learned here in all 50 years or so I’ve been running this in Washington DC and I built the monument and museum. So they invited me back to here. So they invited me back to talk about how they were gonna re teach this program they had there for something they got rid of, and they brought it back originally. The great I can’t remember name right now, but it’s a great project and they want me to sort of tell them about what I thought.

So they teach but they teach there is that Sherman’s Army when it came through the south, burnt down the great city of Atlanta killed off all the culture, ruined the economy, destroyed this whole thing. And, and when they when they were finished, the people of Atlanta because they were so brave and courageous, they rose up like a great pheonix from nothing and rebuilt what’s now another shiny city there in Atlanta and it was just terrible what Sherman did. I said well, okay, that’s one way to teach it, here’s another way to teach. When Sherman’s Army entered Georgia from not from from from South Carolina, there was a woman living in a town near Dalton, Georgia, who was Michelle Obama’s great, great, great aunt. She was enslaved. She was 18 years old. She had two children by her owner. For her, when she heard Sherman’s Army was coming she looked over that hill and saw the dust coming, she heard the guns firing and stuff. She must’ve started singing “My eyes have seen the glory of the coming of the Lord” and as Sherman’s Army proceeded south through Atlanta to Savannah 440,000 African Americans who were being held as slaves in the state of Georgia, were freed by that army.

So this is the army of liberation. There’s another way to tell that story. And if you’re Black man or Black woman, or child, that’s the story you need to hear. Because you need to know your people fought for their own freedom. And that’s why we get these names on our wall out here. And that story is the real test, the real truth of what happened with this army. At the end of this war, Congress passed 13th, 14th, and 15th amendments. African Americans were freed. We got citizenship under the 14th Amendment and the right to vote in the 15th Amendment. And so, this is another way to talk about history, what changed was changed America freedom of 3.9 million African Americans who had been enslaved. So why isn’t that being taught in the school system? It’s not being taught, because that doesn’t fit with the narrative that people want. That they were, that African Americans were happy being slaves, that I was happy walking to school every day, while white kids passed me on that bus, throwing rocks at me and stuff. If they thought I was happy…

I just saw Judy walk up, Judy Richardson, that we couldn’t wait to start the Student Nonviolent Coordinating Committee. So we go out there and shake up all over the town, change all that stuff, make make that a better place for everybody. And now when you go back to those citizen states, there’s a lady here from Birmingham, Alabama, you go back to most of those cities in the south, there are African American mayors of all of those cities, big cities in the south anywhere, but Atlanta, down in Savannah, I didn’t even know that was a mayor of Savannah until I went down there to work on a campaign back in June, in January, so so so so it made a big difference in the south.

Teaching is important. Having good teachers who care who really want to see their students go out and do something worthwhile is important. And there’s no getting around that. It’s just because you got to be able to find young people out here who are willing to challenge this society, to try to go out and tell the great story, that we are all created equal, and we work together we can do some good things. There is enough money, there is enough currency, there is enough wealth in America. So we can all have a decent job, make a decent living, go to a decent school and educate our kids and do well in life. There is enough. We don’t have to be jealous, fighting each other over these problems. There’s definitely enough, we just need to be organizing society. In order to do that you have to keep doing your job and I have to keep doing mine. May God continue to bless all of you. May God continue to bless America. Thank you. 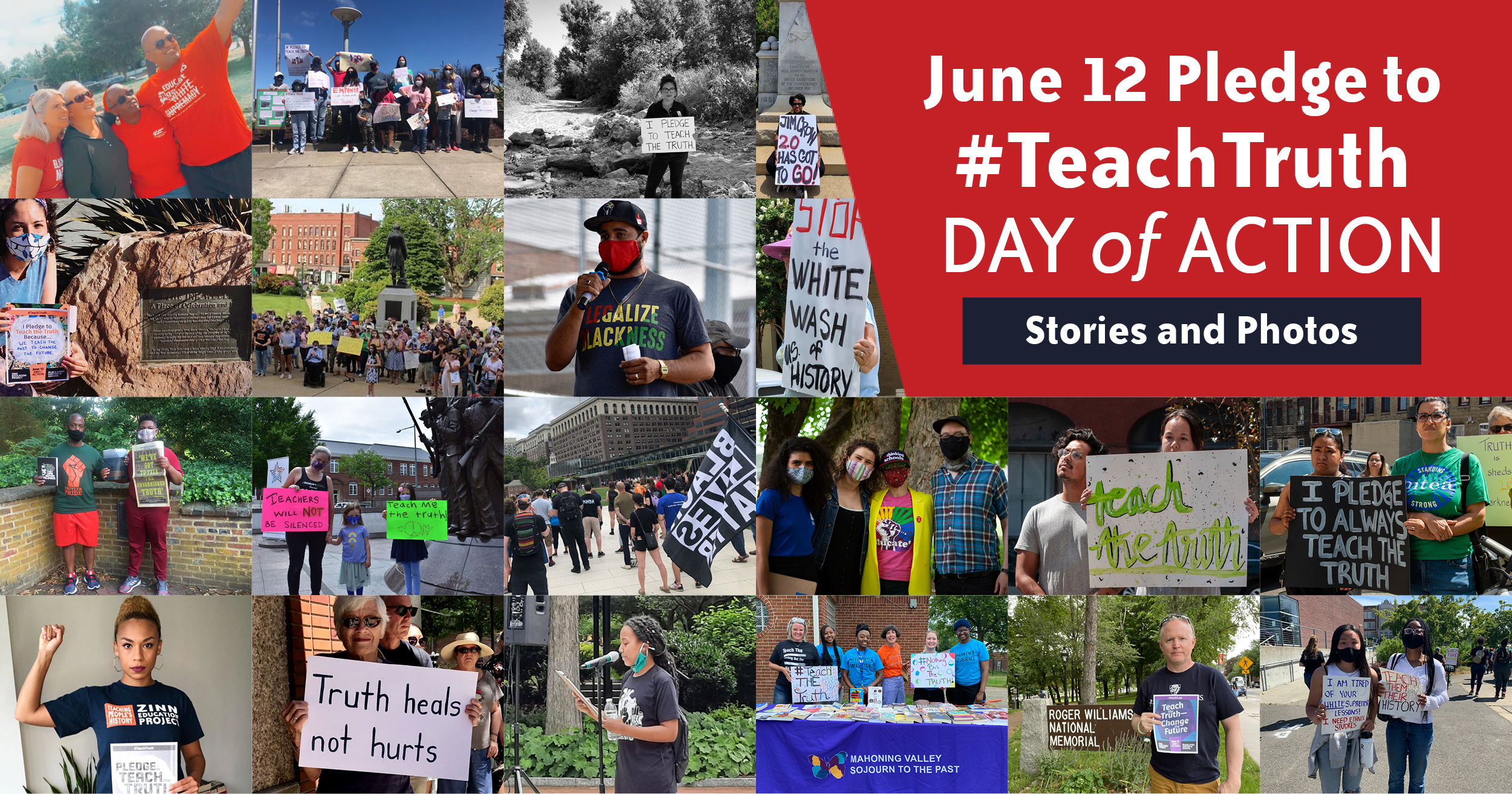