What Do We Want Children to Learn About Africa? 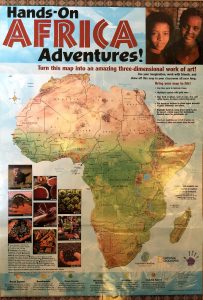 Not long ago I saw a new map of Africa in a classroom. With all the recent information available, I was intrigued to see how the continent was currently being depicted on this National Geographic map for classrooms.

I was disturbed to discover that one of the nine facts listed along the border of the map included a declaration that in many African cultures people eat bugs. The question here is not to ask whether or not bugs are actually eaten anywhere in Africa, but, if there are only nine facts presented about the entire continent of Africa in a map for a U.S. audience, why include bugs at all?

Children in the United States need to be able to make connections to their own stories and lives to help them understand others.  The only connection they can make to eating bugs is that it is gross. There are countless other facts that National Geographic could have highlighted for children to connect with, such as the millions of trees planted by the Kenyan Greenbelt Movement under the leadership of Wangari Maathai or the fact that soccer is a popular sport in much of the continent.

To illustrate my point, I use the following lists when I present workshops. I read each list aloud and ask the teachers to think about what students learn from each one. I don’t reveal until later that list A is from the National Geographic map. [Note that Teaching for Change staff have also done this exercise in teacher workshops. We use a printed version of both lists and ask which list of facts (A or B) they think it is more important for students to learn.]

Facts about the African Continent

Their comments about each list demonstrate the range of my concerns.

Then I reveal the sources. List A comes from a 2006 National Geographic map and list B comes largely from my book, Africa Is Not a Country.

Several teachers have thanked me for bringing this to their attention. I express to them that as a writer of informational books it is my responsibility to give young readers a culturally respectful picture of the world beyond their own neighborhoods and encourage them to make connections to their own lives.

During the rest of my workshop, I show teachers several ways to teach children about the African continent.

One example is asking young children to examine with me the cover of my book, Africa Is Not a Country. The illustration, by Anne Sibley O’Brien, accurately represents many faces of children who live on the African continent.

The goal of this activity is for young children to compare their own clothes with the clothes they see on the cover and to begin to understand and appreciate human diversity beyond simply labeling others as “different.” They see tall and short children, children wearing glasses and children with white, brown and black skin and a variety of hairstyles. Some of these children may be just like them. I remember one student who jubilantly shouted, “I have a baby sister too!” As children use their base of knowledge to explore and observe the world around them they are making connections.

As we teach children about the world, we must be mindful of the knowledge and information we share with them. The images and stories children see and hear form their base of reality. The pictures and words in books, movies, games, and maps help or hinder children in building a foundation of appreciation and respect for humanity in all its diversity.

Check out this carefully selected list of children’s books that challenge stereotypes about Africa.