Writing for Freedom: A Multidisciplinary Study of Freedom Schools Then and Now 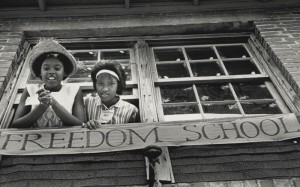 “Education should enable children to possess their own lives instead of living at the mercy of others.” —Charlie Cobb Jr.

“Education should enable young people to function productively and meaningfully in society and give them the tools to change society.” —Charlie Cobb Jr.

A team of teachers in McComb, Mississippi began the year as historians, combing through primary documents from the 1964 Mississippi Freedom Schools in a seminar for language arts, history, and science teachers. The seminar used the inquiry-based, hands-on, and reflective pedagogy of the Freedom Schools* so that participants learned about the curriculum not only through the readings, but they also experienced it. Freedom Schools were examined in the context of the long struggle for freedom, voting rights, quality education, and more in Mississippi and the United States as a whole.

Here is a brief description of highlights from the two days, followed by examples of how participants have already brought the content and pedagogy to their classrooms. 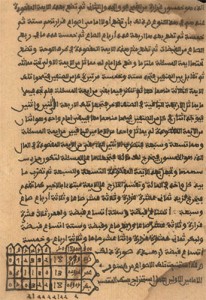 Gallery Walk on the History of Education in Mississippi: The library where we met was set up as a mini-museum with images, primary documents, charts and quotes, in chronological order, on the history of education in Mississippi. The information came primarily from a historical overview developed by Bill and Rita Bender and from a study by Rebecca Miller Davis called “The Three R’s—Reading, ’Riting, and Race: The Evolution of Race in Mississippi History Textbooks, 1900-1995.” We began the timeline in pre-colonial Timbuktu, highlighting the high level of scholarship with universities, science, literature, math, and history.

Freedom songs from the modern Civil Rights Movement played as participants walked silently around the “exhibit.” Everyone left messages as they walked around using post-it notes– insights, questions, and comment on other participants’ notes. 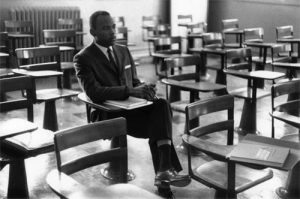 When the group came back together, participants commented that they were able to see what has changed and how far we still have to go. They also appreciated that they learned more in this 20-minute gallery walk than they could have in a full-day lecture on the topic. They brainstormed ways they could use gallery walks in their respective subject areas. The following week, Ms. Miller at Higgins Middle School used a gallery walk to prepare her students for a reading of Witness by Karen Hesse. She posted images from the time period and played music by Ella Fitzgerald. Students responded very positively. Here are two of their comments: “It was a great way to introduce the book.” “I thought it was cool. We could learn a lot from a Gallery walk in history.  We need to do this more often!”

Here is the Gallery Walk on the History of Education in Mississippi Through the Lens of Race.

Voting Rights: Meet the Pioneers. Each participant received a story from someone who fought for voting rights from Reconstruction to the 1960s. The stories were selected to highlight key aspects of the voting rights struggle, such as: voting is a life and death issue; local and national elections provide democratic access to rights and resources in this country; how and why African Americans have been denied access; strategies used by groups and individuals to achieve voting rights; and the fact that the struggle has a long history and continues today. Participants wrote a letter to the person in their respective story. In their letter they introduced themselves, reflected on what they had read, asked questions, and shared news that might be of interest from today. Participants commented that it was a powerful experience to “correspond with history” and that they could use this activity in all historic time periods and in other subject areas.

To share the essence of letters, everyone highlighted their favorite line or phrase. These were then shared in a powerful read-around.

Why Freedom Schools? To dig deeper into the study of education in Mississippi and the broader struggle for freedom, participants engaged in a jig-saw lesson. Expert groups were created with readings (mostly primary documents) on: Freedom School Curriculum; Freedom School Teachers and Students; the History of Freedom Schools (including Citizenship schools, Non-Violent High in McComb, and more.) 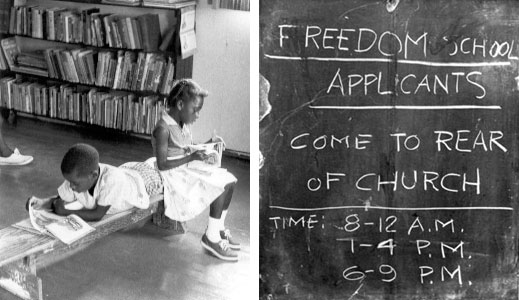 Were There Freedom Schools in Our County? We used the Question Formulation Technique from the Right Question Institute to surface questions about Freedom Schools in southwest Mississippi. We simply posted the statement “There were Freedom Schools in southwest Mississippi” and then had participants in small groups, using the Question Formulation Technique protocols introduced earlier in the session, draft as many questions as they could. After drafting, they prioritized which ones were of most interest for further investigation. Here are just a few that they came up with.

Primary documents and books about Freedom Schools were shared with the participants so that they could begin to find the answers to their own questions. We were honored to also be joined by Jackie Byrd Martin who had attended Non-Violent High (the 1961 precursor to the Freedom Schools) in McComb and a team of students who have been researching the history of the voting rights struggle in McComb. In addition to reviewing primary documents, participants eagerly interviewed the special guests. Some of the younger teachers who had grown up in McComb were particularly interested to find out where the Freedom Schools were located and why they had never heard of them before.

Dialogue Poems: The next day participants worked in pairs to compare their own education to that of Freedom Schools using dialogue poems. Some wrote in the voice of teachers, others as students. We used the poem “Honeybees” by Paul Fleischman as a prompt, drawing from the lesson in Rethinking Our Classrooms.

Teaching Others about Freedom Schools: In one of two culminating activities, participants selected a product to create to teach others about Freedom Schools. These ranged from a children’s book to recruitment posters to articles for the Enterprise-Journal newspaper. Here is the chart outlining all the options. The results were posted around the room for a second gallery walk, allowing everyone to see and comment on each other’s work. This was inspiring and also reassuring. One teacher prepared a recruitment poster to encourage students to sign up for the school. Her worries that it was not very good were overcome when she saw the comments from her peers, including one person who said “register me today.” 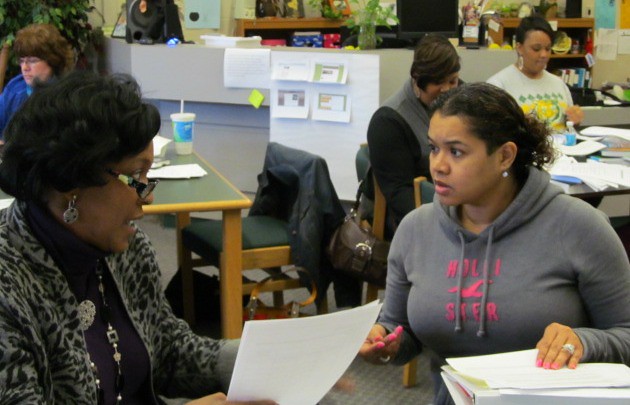 It’s Not Just the Content: Throughout the two days it was clear that the heart of Freedom Schools was not just what children learned but how they learned. The chance to ask questions, to think critically, to interact, and to use hands-on learning was just as crucial as learning about the history that had been purposely omitted from textbooks. The Freedom School pedagogy exercised the mind and produced habits of civic engagement and activism. Participants in the McComb workshop noted that in the past decades, schools have reverted to the same kind of teacher-centered, passive curriculum that the Freedom Schools challenged 50 years ago. Therefore, each participant identified ways that they could incorporate some of the interactive activities into their classes in the weeks ahead, with the goal of ensuring a shift from teacher to student-centered activities and questioning.

This workshop was complimented by a full day session by the Right Question Institute the following week. Many of the same participants had a chance to attend.

It is our hope that Writing for Freedom and the Right Question Institute workshops helped prepare students not only for the 2014 Freedom Schools 50th anniversary, but also to play an active role in carrying on the tradition of Freedom Schools today.

Here are examples of teachers bringing the pedagogy to their classrooms. 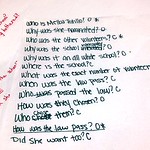 * What are Freedom Schools?

The Freedom Schools of the 1960s were first developed by the Student Nonviolent Coordinating Committee (SNCC) during the 1964 Freedom Summer in Mississippi. They were intended to counter the “sharecropper education” received by so many African Americans and poor whites. Through reading, writing, arithmetic, history, and civics, participants received a progressive curriculum during a six-week summer program that was designed to prepare disenfranchised African Americans to become active political actors on their own behalf (as voters, elected officials, organizers, etc.). Nearly 40 freedom schools were established serving close to 2500 students, including parents and grandparents.