Cautionary Words about Far Right from 1962

SNCC veteran Timothy L. Jenkins wrote an open letter about the far right, published in the Mississippi Free Press on August 18, 1962. The letter was written to combat the rising neo-fascist youth movement, “Young American For Freedom” against the sixties’ student voting rights mobilization known as “Mississippi Summer.” Jenkins notes, “It came on the heels of my well-publicized fight recorded in the pages of Time Magazine with Bill Buckley, the dean of right-wing misinformation.” This letter allows us to see the struggles for justice today in a historic context. 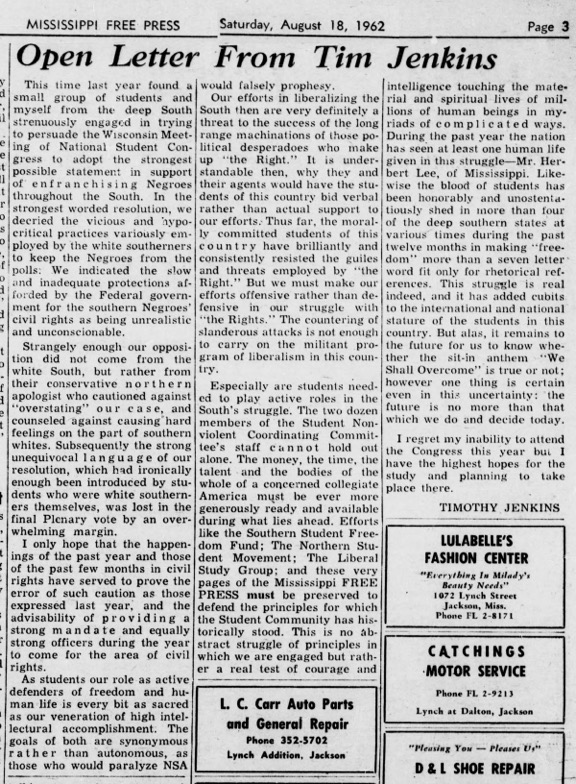 This time last year found a small group of students and myself from the deep South strenuously engaged in trying to persuade the Wisconsin Meeting of National Student Congress to adopt the strongest possible statement in support of enfranchising Negroes throughout the South. In the strongest worded resolution, we decried the vicious and hypocritical practices variously employed by the white southerners to keep the Negroes from the polls. We indicated the slow and inadequate protections afforded by the Federal government for the southern Negroes’ civil rights as being unrealistic and unconscionable.

Strangely enough our opposition did not come from the white South, but rather from their conservative northern apologist who cautioned against “overstating” our case, and counseled against causing hard feelings on the part of southern whites. Subsequently the strong unequivocal language of our resolution, which had ironically enough been introduced by students who were white southerners themselves, was lost in the final Plenary vote by an overwhelming margin.

I only hope that the happenings of the past year and those of the past few months in civil rights have served to prove the error of such caution as those expressed last year, and the advisability of providing a strong mandate and equally strong officers during the year to come for the area of civil rights.

As students our role as active defenders of freedom and human life is every bit as sacred as our veneration of high intellectual accomplishment. The goals of both are synonymous rather than autonomous, as those who would paralyze NSA would falsely prophesy.

Our efforts in liberalizing the South then are very definitely a threat to the success of the long-range machinations of those political desperadoes who make up “the Right.” It is understandable then, why they and their agents would have the students of this country bid verbal rather than actual support to our efforts. Thus far, the morally committed students of this country have brilliantly and consistently resisted the guiles and threats employed by “the Right.” But we must make our efforts offensive rather than defensive in our struggle with “the Rights.” The countering of slanderous attacks is not enough to carry on the militant program of liberalism in the country.

Especially are students needed to play active roles in the South’s struggle. The two dozen members of the Student Nonviolent Coordinating Committee’s staff cannot hold out alone. The money, the time, the talent and the bodies of the whole of a concerned collegiate America must be ever more generously ready and available during what lies ahead. Efforts like the Southern Student Freedom Fund; the Liberal Study Group; and these very pages of the Mississippi FREE PRESS must be preserved to defend the principles for which the Student Community has historically stood.

This is no abstract struggle of principles in which we are engaged but rather a real test of courage and intelligence touching the material and spiritual lives of millions of human beings in myriads of complicated ways. During the past year, the nation has seen at least one human life given in this struggle—Mr. Herbert Lee, of Mississippi. Likewise, the blood of students has been honorably and unostentatiously shed in more than four of the deep southern states at various times during the past twelve months in making “freedom” more than a seven-letter word fit only for rhetorical references.

This struggle is real indeed, and it has added cubits to the international and national stature of the students in this country. But alas, it remains to the future for us to know whether the sit-in anthem “We Shall Overcome” is true or not. However, one thing is certain even in this uncertainty: the future is no more than that which we do and decide today.

I regret my inability to attend the Congress this year, but I have the highest hopes for the study and planning to take place there.

The letter is in the Wisconsin Historical Society Freedom Summer Collection.

Timothy L. Jenkins is a SNCC veteran and a board member of Teaching for Change. Read his bio on the SNCCDigital.org website.