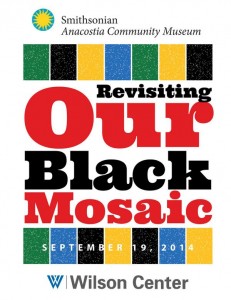 On September 19, the Smithsonian’s Anacostia Community Museum (ACM) hosted the symposium: “Revisiting Our Black Mosaic.” We are honored to have been invited to the participate in this 20th anniversary of the 1994 Black Mosaic exhibition, described below:

The progressive 1994 exhibition Black Mosaic at the Anacostia Community Museum was among the first documentation projects to examine the perceptions and realities of race, nationality, and ethnicity of black urban immigrants. It presented personal stories of African-descendant immigrants from Central America, South America, and the Caribbean who resided in the D.C. metro area.

Our very own associate director, Allyson Criner Brown, was in good company with Teaching for Change colleague and labor activist, Bill Fletcher Jr. and others on the “Black-Brown Coalition Building” panel. This panel examined the history of collaborations among African Americans and Latinos in U.S. history–including common oppressions, divisions, and alliances.

Criner Brown described how our parent organizing project, Tellin’ Stories, strives to overcome the divisions so that families can work together to demand a better quality education for their children. She noted “a Salvadoran mother has a lot more in common with a mother from Southeast, D.C., than either of them realize until they engage in some of our story sharing activities.”

The full day symposium offered six sessions and a keynote speaker, with topics including: “Where International Becomes Local: Immigration in the D.C. Metro Area,” “The Black Mosaic of Washington D.C.: Unpacking Multiple ‘Black’ Identities,” to “Educating the Diaspora: Turning Diverse Realities into Pedagogy.”

These panels were led by such esteemed colleagues as Pedro Noguera, Natalie Hopkinson, Mwiza Munthali of TransAfrica, and Clarence Lusane. Throughout the day, questions surfaced about how individuals identify in various spaces and of how identity is defined within the United States. Check out some of the commentary and insights on Twitter at #RevisitingOurBlackMosaic and #BM20ACM.

Overall, the symposium offered a wealth of critique and remained true to the mission of the Anacostia Community Museum to “challenge perceptions, broaden perspectives, generate new knowledge, and deepen understanding about the ever-changing concepts and realities of ‘community.’ ”

Our curriculum specialist, Julian Hipkins III and volunteer fellow, Ravon Ruffin, were pleased to be in attendance. Many thanks to all those who collaborated on the success of this event.