The National Endowment of the Humanities established the Created Equal film series to mark the historic anniversaries of the Emancipation Proclamation and the March on Washington for Jobs and Freedom. As the NEH explains:

The Created Equal project uses the power of documentary films to encourage public conversations about the changing meanings of freedom and equality in the United States. The films that are part of this project tell the remarkable stories of individuals who challenged the social and legal status quo, from slavery to segregation.

Teaching for Change was pleased to co-sponsor Created Equal at a school in Washington, D.C., E. L. Haynes Public Charter School, in the spring of 2014. A small Created Equal grant supported the film series with special guests and dinner for middle and high school students, their families, and teachers. The school based co-coordinators were Michelle Molitor and Barrie Moorman.

Here are short descriptions and photos from the three film showings and discussions.

The Loving Story: In the second installment of the Created Equal Film Series, there was again a great crowd of about 50 participants including middle school and high school youth, parents and community members, as well as school staff. The film was introduced by Dwight Draughon Jr., from Howard Law School, pictured below. Using historical video footage and interviews from the ’60s, the film powerfully showed the story of Mildred and Richard Loving as they fought for their marriage to be legally recognized in their home state of Virginia. There were many emotional reactions to the struggles shown on screen, most notably the surprised gasps toward the end of the film where it’s noted that Alabama was the last state to repeal anti-miscegenation laws in 2000.

After the viewing, we split up into small groups to reflect on the film and discuss our reactions. My group unpacked the phrase “racial integrity” as a defense mentioned in the film for laws prohibiting interracial marriage, which led to an interrogation of the very ideas behind race and racial categories. The large group debrief included students voicing their experiences of racism and gentrification in D.C., and the connections they were making to same-sex marriage equality today. In a nice closing, one student summed up the film’s portrayal of the Lovings’ struggle that led to the nationwide legalization of interracial marriage: “Love is powerful.” Description and photos from Neha Singhal.

Freedom Riders: The featured guest was Joan Mulholland, who participated in the Freedom Rides in 1961. With approximately 50 students, parents, teachers, administrators and other community members in attendance, there was a lively exchange with Ms. Mulholland. Students and adults asked her lots of questions, including how other people reacted to her participation, what issues she thought young people today needed to act on, what motivated her to get involved in the Civil Rights Movement and to uphold non-violence, and how she sees us making progress today. 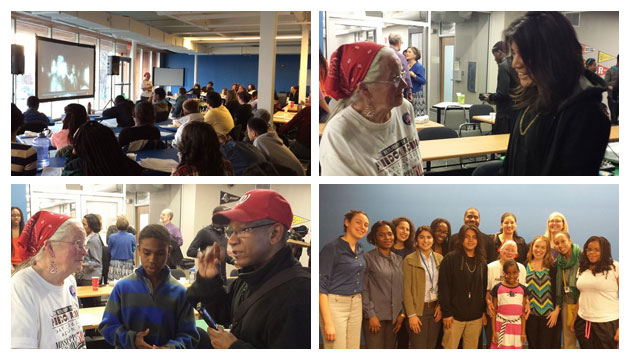 Now that the film series has concluded, co-coordinator Barrie Moorman reflected on its impact:

The best part has been the opportunity to bring people together across age, race, and role lines within a school community and open up dialogue on questions around how we’ve struggled for equality in the past and how that struggle continues today. Particularly at the high school level, the opportunity to have students and their parents sitting around and talking about critical issues is rare; this film series has provided such an opportunity. Students have made significant connections between the content in the films we’ve screened and other historical and current topics that we explore in class and I’ve had powerful conversations with parents and my colleagues about race that would not have happened without a common text to ground our understanding.

← Pete Seeger, Presente!
What Do We Want Children to Learn About Africa? →