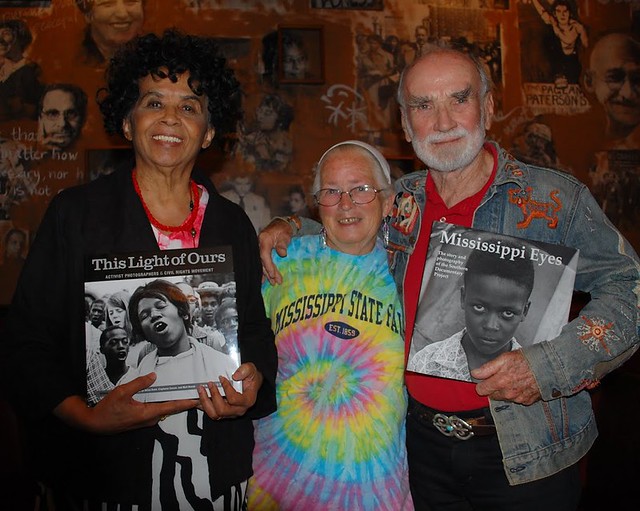 On July 24, 2014, photographer Matt Herron and SNCC veteran Dorie Ladner shared photos and stories about the 1960s Freedom Movement in Mississippi. Askia Muhammad from WPFW moderated and shared his own memories as a native of Mississippi. The featured books were Mississippi Eyes and This Light of Ours: Activist Photographers of the Civil Rights Movement from the University Press of Mississippi.

The photos served as prompts for stories and reconstructing memories for the presenters and audience members who were also veterans of the Freedom Movement. For example, Herron showed a photo of the police confronting peaceful Civil Rights Movement activists at a funeral. Herron could not remember how they got away without being arrested or attacked. Audience member Joan Trumpauer Mulholland, who was there at the time, shared her own memory of Herron threatening the police that he would photograph and document the abuse.

Herron described the scene. Since we did not record the event, we have copied the description from an online version. Learn more from an interview of Herron on the Telling Their Stories oral history website.]

The picture was taken at the side entrance to the Governor’s mansion on Capital Street in Jackson in the summer of 1965. The boy is Anthony Quinn, aged 5. His mother, Mrs. Ailene Quinn of McComb, Mississippi and her children were trying to see Governor Paul Johnson; they wanted to protest aganist the election of five Congressmen from districts where blacks were not allowed to vote. Refused admittance, they sat on the steps. The policeman struggling with Anthony is Mississippi Highway Patrolman Hughie Kohler. As Kohler attempted to confiscate the flag, Mrs. Quinn said: ‘Anthony, don’t let that man take your flag.’ Kohler went berserk, yanking Anthony off his feet.

In the South during the civil rights movement, the American flag was a potent symbol of support for racial integration (and support for federal law). Southerners who believed in racial segregation displayed Confederate flags instead. People were pulled from their cars by policemen and beaten simply for displaying an American flag on their license plates. So the simple act of a small child carrying an American flag represented defiance of Mississippi law and custom.

There was a full house for the event hosted by Teaching for Change and Busboys and Poets with co-sponsors: Institute for Policy Studies, Lessons of the 60’s Project, NAACP – Washington D.C. Branch, SNCC Legacy Project, WPFW, Julian Bond, and Aviva Kempner.