“If the Atlantic were to dry up it would reveal a scattered pathway of human bones, African bones, marking the various routes of the middle passage.” — John Henrik Clark

Understanding that politics is the science of power, and that knowledge is a source of power, the Middle Passage Ceremonies and Port Markers Project (MPCPMP) seeks to commemorate the lives of the nearly of the nearly two million Africans who perished during the transatlantic human trade and the ten million who survived.

When describing the Middle Passage, the places of first arrival, the experiences of resistance and survival, all related to the African Diaspora, numbers often served as measures of the magnitude of the transatlantic human trade — twenty-four million Africans removed from their homes; twelve million Africans put on ships; two million died in the ocean crossing; 350 years or 36 consecutive generations of Africans captive; 500,000 captured Africans delivered to the Continental US; 41 documented arrival sites in the US. All this becomes mind numbing after a point.

The MPCPMP invites middle and high school students to help change the perception of enslavement from an abstraction to a reality by putting actual names to the numbers. The advantages to this effort are three fold because it:

Students can play a vital role by researching and documenting the names of enslaved people by year and location. A primary focus is on the port cities where these human beings were sold. In the United States, there are 41 documented arrival sites that were used for more than 350 years. (See map on this page and Port Cities Map in PDF.) Within the last 40 years, scholars, independent researchers, genealogists, and historians have accessed, analyzed, and/or challenged historical records, documents, and materials that were previously unavailable, suppressed, or misrepresented.

A goal of the project is to place markers at the port sites so there will be a permanent record to honor those who perished and those who survived the Middle Passage. An example is the marker below from Jamestown, Virginia. 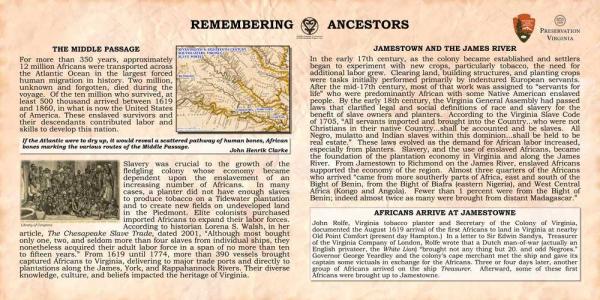 This undertaking, for example in a place like Bristol, RI, would have students assigned to research tax and property records, probate records (wills), bills of sale and lading (a document that lists what is being shipped), and U.S. Census reports from 1790 through 1860 for the names of individual enslaved and free Black or mulatto people who lived in the city or district. When the information of people, place, status, dates, and occupations has been collected, there could be a final product, such as incorporating the information into a document and/or on a banner.  This would be impressive in a place such as Bristol, where even the traces of African and African descendant families have disappeared. They moved to cities such as Newport, Providence, or Kingston, in-state or elsewhere, probably in search of economic opportunities; however, the legacy of their contributions, although couched in language that excludes the mention of slavery, is still reflected in buildings and tourist attractions.  A final product, such as a document that incorporates the names of the people who lived and worked there, will bring this history to life.

Recently at the annual National Conference for Social Studies in Boston, MA, representatives of the Middle Passage Ceremonies and Port Markers Project were able to speak with representatives of Ancestryk12.com, a subsidiary of ancestry.com, and learned that without charge any teacher can register and have access to primary source records that will facilitate this pilot. This site is available to all teachers in private and public schools. This should make this undertaking much easier since research can be conducted based on dates and location.

If you are a teacher or librarian and are interested in learning more about how to have one of your classes participate, please visit the MPCPMP website and/or send an email.