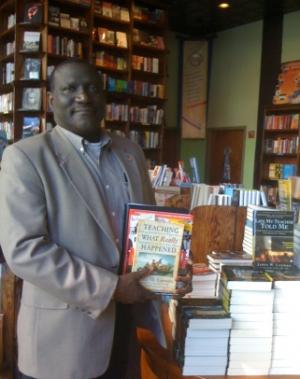 James A. Young, the mayor of Philadelphia, Mississippi, met with Teaching for Change Executive Director Deborah Menkart while in Washington, DC for a sustainable communities summit meeting. (More info). They discussed the US History framework for Mississippi schools which includes a strand on civil and human rights. Teaching for Change is providing training on this strand for teachers from Philadelphia and other Mississippi school districts.

Mayor Young visited the Teaching for Change Bookstore at Busboys and Poets where he is pictured with Teaching What Really Happened by James W. Loewen and our publication, Putting the Movement Back into Civil Rights Teaching.

Mayor Young shared his views and experiences with education. As mayor, he tells students to “dig deeper” in their study of history. When talking about the Civil Rights Movement, Mayor Young says to students: “Don’t just tell me that Rosa Parks got on the bus. If you do that, you are doing a disservice to history.”

In addition to the content of their studies, he is concerned about school policies. Mayor Young described how he was riding to work in his truck one day and noticed a teenager walking away from the school. He called out to the young man, “Aren’t you walking the wrong way?” The student responded, “I arrived 10 minutes late so they told me I had to go home.” The mayor called the young man’s mother and learned that due to health reasons she could not get her son to school on time. The mayor is supporting this mother in a campaign to change the policy, not only for her son but for all students who are kept out of school unnecessarily.

Many thanks to Lawrence Guyot for arranging this meeting with a political leader who encourages students to study about social change in the past and take an active role in making a better future.