‘Is This America?’: 50 Years Ago Sharecroppers Challenged Mississippi Apartheid, LBJ, and the Nation 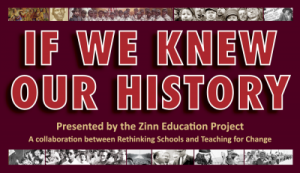 Teaching for Change staff members Julian Hipkins III and Deborah Menkart wrote this article and a related lesson for the 50th anniversary of the Mississippi Freedom Democratic Party (MFDP). The article was published on the Zinn Education Project website for the “If We Knew Our History” series. It was also published on Common Dreams, Alternet, and the Huffington Post. 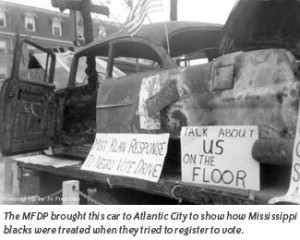 Fifty years ago this month, Mississippi sharecropper Fannie Lou Hamer gripped the nation with her televised testimony of being forced from her home and brutally beaten (suffering permanent kidney damage) for attempting to exercise her constitutional right to vote.

“Is this America, the land of the free and the home of the brave, where our lives be threatened daily, because we want to live as decent human beings?” she asked the credentials committee at the Democratic National Convention in Atlantic City, New Jersey.

Hamer had arrived in Atlantic City on a bus from Mississippi with more than 60 sharecroppers, farmers, housewives, teachers, maids, deacons, ministers, factory workers, and small-business owners. Most were African American and many were women in the integrated delegation. They represented the Mississippi Freedom Democratic Party (MFDP). The MFDP had followed all the rules to represent the state of Mississippi—registering members in public places, not making literacy a prerequisite for citizenship, holding open precinct meetings throughout the state, and selecting delegates at a statewide convention. Historian Howard Zinn, who saw the process firsthand, said the MFDP “made the political process seem healthy for the first time in the state’s history. It was probably as close to a grassroots political convention as this country has ever seen.” Read more.

← Teaching #BlackLivesMatter
Where do people talk honestly about race? At the A.C.T.O.R. series →